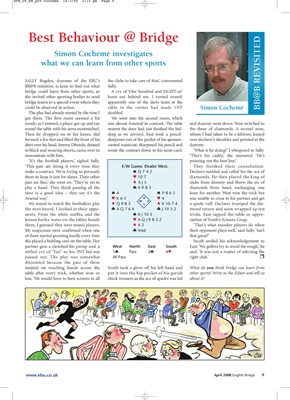 what we can learn from other sports

SALLY Bugden, doyenne of the EBU’s the clubs to take care of that,’ commented

BB@B initiative, is keen to find out what Sally.

bridge could learn from other sports, so A cry of ‘One hundred and EIGHT-ee’

she invited other sporting bodies to send burst out behind me. I turned round:

could be observed in action. table in the corner had made 1NT Simon Cochemé

The play had already started by the time I doubled.

got there. The first room seemed a bit We went into the second room, which

rowdy; as I entered, a player got up and ran was almost funereal in contrast. The table and dummy went down. West switched to

round the table with his arms outstretched. nearest the door had just finished the bid- the three of diamonds. A second man,

Then he dropped on to his knees, slid ding as we arrived. East took a pencil- whom I had taken to be a kibitzer, leaned

in black and wearing shorts, came over to wrote the contract down in his score-card. ‘What is he doing?’ I whispered to Sally.

remonstrate with him. ‘That’s his caddy,’ she answered. ‘He’s

‘This pair are doing it every time they E/W Game. Dealer West. They finished their consultation.

make a contract. We’re trying to persuade ♠Q742 Declarer nodded and called for the ace of

them to keep it just for slams. Their other ♥ 10 7 diamonds. He then played the king of

pair are fine,’ she went on. ‘They’ve yet to ♦AJ5 clubs from dummy and threw the six of

play a hand. They think passing all the ♣K983 diamonds from hand, exchanging one

nents. From the white outfits, and the ♠ K J 10 5 tricks. East tapped the table in appre-

lemon barley water on the tables beside ♥AQJ9832 ciation of South’s Scissors Coup.

them, I guessed they were tennis players. ♦62 ‘That’s what snooker players do when

My suspicions were confirmed when one ♣ Void their opponent plays well,’ said Sally. ‘Isn’t

of them started grunting loudly every time that great?’

she placed a bidding card on the table. Her South smiled his acknowledgement to

partner gave a clenched fist pump and a West North East South East. ‘We golfers try to avoid the rough,’ he

passed out. The play was somewhat All Pass right club.’

disjointed because the pair of them

table after every trick, whether won or put it into the hip pocket of his garish other sports? Write to the Editor and tell us

lost. ‘We would have to have screens in all check trousers as the ace of spades was led about it!