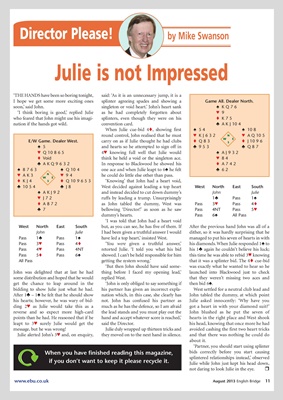 Julie is not Impressed

‘THE HANDS have been so boring tonight, said: ‘As it is an unnecessary jump, it is a

I hope we get some more exciting ones splinter agreeing spades and showing a Game All. Dealer North.

‘I think boring is good,’ replied Julie as he had completely forgotten about ™ 9

who feared that John might use his imagi- splinters, even though they were on his t K75

t Void think he held a void or the singleton ace. ™ 84

™ 94 he could do little else other than pass.

´ AKJ92 and instead decided to cut down dummy’s John Julie

‘I was told that John had a heart void

West North East South but, as you can see, he has five of them. If After the previous hand John was all of a

John Julie I had been given a truthful answer I would dither, so it was hardly surprising that he

Pass 1® Pass 1´ have led a top heart,’ insisted West. managed to put his seven of hearts in with

Pass 3™ Pass 4t ‘You were given a truthful answer,’ his diamonds. When Julie responded 1´ to

Pass 4™ Pass 4NT retorted Julie. ‘I told you what his bid his 1® again he couldn’t believe his luck;

Pass 5t Pass 6´ showed. I can’t be held responsible for him this time he was able to rebid 3™ knowing

All Pass getting the system wrong.’ that it was a splinter bid. The 4t cue-bid

John was delighted that at last he had thing before I faced my opening lead,’ launched into Blackwood just to check

some distribution and hoped that he would replied West. that they weren’t missing two aces and

get the chance to leap around in the ‘John is only obliged to say something if then bid 6´.

bidding to show Julie just what he had. his partner has given an incorrect expla- West settled for a neutral club lead and

After 1® – 1´ he felt that he should show nation which, in this case, she clearly has John tabled the dummy, at which point

his hearts; however, he was wary of bid- not. John has confused his partner as Julie asked innocently: ‘Why have you

ding 2™ as Julie would take this as a much as he has the defence, so I am afraid got a heart in with your diamond suit?’

points than he had. He reasoned that if he hand and accept whatever score is reached,’ hearts in the right place and West shook

leapt to 3™ surely Julie would get the said the Director. his head, knowing that once more he had

message, but he was wrong! Julie duly wrapped up thirteen tricks and avoided cashing the first two heart tricks

Julie alerted John’s 3™ and, on enquiry, they moved on to the next hand in silence. and that there was nothing he could do

‘Partner, you should start using splinter

When you have finished reading this magazine, bids correctly before you start causing

if you don’t want to keep it please recycle it. Julie while John just kept his head down,

not daring to look Julie in the eye. r