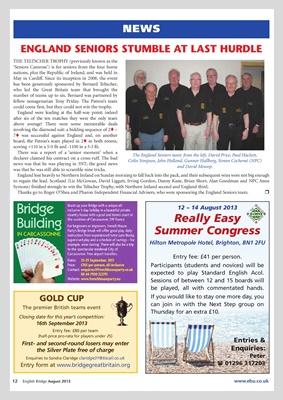 THE TELTSCHER TROPHY (previously known as the

‘Seniors Camrose’) is for seniors from the four home

nations, plus the Republic of Ireland, and was held in

May in Cardiff. Since its inception in 2008, the event

has been generously sponsored by Bernard Teltscher,

who led the Great Britain team that brought the

number of teams up to six. Bernard was partnered by

could come first, but they could not win the trophy.

England were leading at the half-way point; indeed

after six of the ten matches they were the only team

above average! There were some memorable deals

involving the diamond suit: a bidding sequence of 2t –

7t was successful against England and, on another

board, the Patron’s team played in 2t in both rooms,

There was a report of a ‘senior moment’ when a

declarer claimed his contract on a cross-ruff. The bad

news was that he was playing in 3NT; the good news

was that he was still able to scramble nine tricks.

England lost heavily to Northern Ireland on Sunday morning to fall back into the pack, and their subsequent wins were not big enough

Thanks go to Roger O’Shea and Pharon Independent Financial Advisers, who were sponsoring the England Seniors team. r

Participants (students and novices) will be

Sessions of between 12 and 15 boards will

be played, all with commentated hands.

GOLD CUP If you would like to stay one more day, you

can join in with the Next Step group on

Closing date for this year’s competition:

(half-price pro-rata for players under 25)

First- and second-round losers may enter