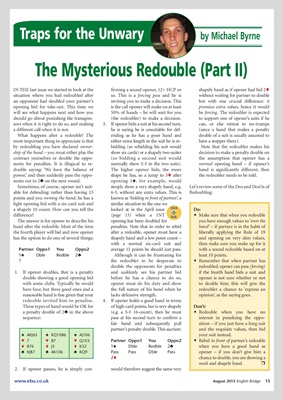 IN THE last issue we started to look at the firming a sound opener, 12+ HCP or shapely hand as if opener had bid 2t

situation where you had redoubled after so. This is a forcing pass and he is without waiting for partner to double

an opponent had doubled your partner’s inviting you to make a decision. This but with one crucial difference: it

opening bid for take-out. This time we is the call opener will make on at least promises extra values, hence it would

will see what happens next and how you 50% of hands – he will wait for you be forcing. The redoubler is expected

should go about punishing the transgres- (the redoubler) to make a decision. to support one of opener’s suits if he

sors when it is right to do so, and making 3. If opener bids a suit at his second turn, can, or else retreat to no-trumps

a different call when it is not. he is saying he is unsuitable for def- (since a hand that makes a penalty

What happens after a redouble? The ending as he has a poor hand and double of a suit is usually assumed to

most important thing to appreciate is that either extra length in the suit he is re- have a stopper there).

nents for penalties. It is illogical to re- normally show 5-5 in the two suits). normal opening hand – if opener’s

double saying: ‘We have the balance of The higher opener bids, the more hand is significantly different, then

power,’ and then suddenly pass the oppo- shape he has, so a jump to 3t after the redoubler needs to be told.

nents out in 2® on the next round. opening 1´, for example, would

Sometimes, of course, opener isn’t suit- simply show a very shapely hand, e.g. Let’s review some of the Dos and Don’ts of

able for defending: rather than having 13 6-5, without any extra values. This is Redoubling:

points and you owning the hand, he has a known as ‘bidding in front of partner’, a

a shapely 10 count. How can you tell the looked at in the April issue click Do:

difference? (page 13) when a 1NT link • Make sure that when you redouble

hand after the redouble. Most of the time penalties. Note that in order to rebid hand’ – if partner is in the habit of

the fourth player will bid and now opener after a redouble, opener must have a liberally applying the Rule of 19

has the option to do one of several things: shapely hand and a low point count – and opening on very slim values,

Partner Oppo1 You Oppo2 average 12 points he should just pass. with a sound redouble based on at

1´ Dble Redble 2® Although it can be frustrating for least 10 points.

? the redoubler to be desperate to • Remember that when partner has

double the opponents for penalties redoubled, opener can pass (forcing)

1. If opener doubles, that is a penalty and suddenly see his partner bid if the fourth hand bids a suit and

double showing a good opening bid before he has a chance to do so, opener is not sure whether or not

with some clubs. Typically he would opener must do his duty and show to double him; this will give the

have four, but three good ones and a the full nature of his hand when he redoubler a chance to ‘express an

reasonable hand is fine given that your lacks defensive strength. opinion’, as the saying goes.

redouble invited him to penalise. 4. If opener holds a good hand in terms

These types of hand would be OK for of high-card points, but is very shapely Don’t:

sequence: pass at his second turn to confirm a interest in penalising the oppo-

partner’s penalty double. This auction: and the requisite values, then bid

2t chance to double, you are showing a

2. If opener passes, he is simply con- would therefore suggest the same very