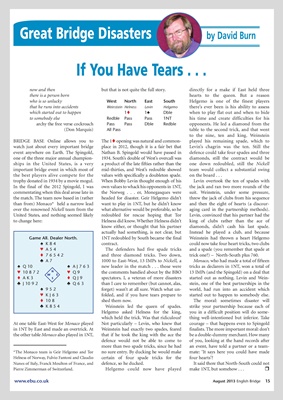 now and then but that is not quite the full story. directly for a make if East held three

there is a person born hearts to the queen. But a reason

archy the free verse cockroach Pass Pass Dble Redble opponents. He led a diamond from the

(Don Marquis) All Pass table to the second trick, and that went

to the nine, ten and king. Weinstein

BRIDGE BASE Online allows you to The 1t opening was natural and common- played his remaining spade, which to

watch just about every important bridge place in 2012, though it is a fair bet that Levin’s chagrin was the ten. Still the

event anywhere on Earth. The Spingold, Nathan B. Spingold would have passed in defence could take four spades and three

one of the three major annual champion- 1934. South’s double of West’s overcall was diamonds, still the contract would be

ships in the United States, is a very a product of the late fifties rather than the one down redoubled, still the Nickell

important bridge event in which most of mid-thirties, and West’s redouble showed team would collect a substantial swing

the best players alive compete for the values with specifically a doubleton spade. on the board . . .

trophy donated in 1934 by a movie mogul. When Bobby Levin thought enough of his Levin overtook the ten of spades with

In the final of the 2012 Spingold, I was own values to whack his opponents in 1NT, the jack and ran two more rounds of the

commentating when this deal arose late in the Norweg . . . er, Monegasques were suit. Weinstein, under some pressure,

the match. The team now based in (rather headed for disaster. Geir Helgemo didn’t threw the jack of clubs from his sequence

than from) Monaco* held a narrow lead want to play in 1NT, but he didn’t know and then the eight of hearts (a discour-

over the renowned Nickell team from the what alternative would be preferable, so he aging card in the partnership methods).

United States, and nothing seemed likely redoubled for rescue hoping that Tor Levin, convinced that his partner had the

to change here: Helness did know. Whether Helness didn’t king of clubs rather than the ace of

know either, or thought that his partner diamonds, didn’t cash his last spade.

actually had something, is not clear, but Instead he played a club, and because

t AK3 S t QJ9 spectators. I, a veteran of more disasters started out as nothing. Levin and Wein-

´ 952 forget) wasn’t at all sure. Watch what un- world, had run into an accident which

™ KJ63 folded, and if you have tears prepare to started out to happen to somebody else.

t 10 8 shed them now. The moral: sometimes disaster will

® K854 Weinstein led the queen of spades. strike your partnership because each of

Helgemo asked Helness for the king, you in a difficult position will do some-

which held the trick. Was that ridiculous? thing well-intentioned but inferior. Take

At one table East-West for Monaco played Not particularly – Levin, who knew that courage – that happens even to Spingold

in 1NT by East and made an overtrick. At Weinstein had exactly two spades, feared finalists. The more important moral: don’t

the other table Monaco also played in 1NT, that if he took the king with the ace the be a double-dummy merchant. How many

defence would not be able to come to of you, looking at the hand records after

more than two spade tricks, since he had an event, have told a partner or a team-

*The Monaco team is Geir Helgemo and Tor no sure entry. By ducking he would make mate: ‘It says here you could have made

Helness of Norway, Fulvio Fantoni and Claudio certain of four spade tricks for the four hearts’?

Nunes of Italy, Franck Moulton of France, and defence, so he ducked. It said there that North-South could not