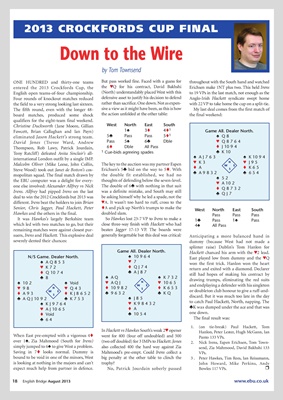 Down to the Wire

ONE HUNDRED and thirty-one teams But pass worked fine. Faced with a guess for throughout with the South hand and watched

entered the 2013 Crockfords Cup, the the ™Q for his contract, David Bakhshi Erichsen make 1NT plus two. This held Irens

English open teams-of-four championship. (North) understandably placed West with this to 19 VPs in the last match, not enough as the

the field to a very strong looking last sixteen. rather than sacrifice. One down. Not as expen- with 22 VP to take home the cup on a split-tie.

The fifth round, even with the longer 48- sive a view as it might have been, as this is how My last deal comes from the first match of

board matches, produced some shock the action unfolded at the other table: the final weekend:

qualifiers for the eight-team final weekend.

mopolitan squad. The final match drawn by the double fit established, we had no

the EBU computer was a delight for every- thoughts of defending below the seven-level.

one else involved: Alexander Allfrey vs Nick The double of 6® with nothing in that suit

Irens. Allfrey had pipped Irens on the last was a definite mistake, and South may still ® QJ7

deal to win the 2012 Crockfords but 2013 was be asking himself why he led a spade, not the

different. Irens beat the holders to join Brian ™A. It wasn’t too hard to ruff, cross to the

Hawkes and the others in the final. doubled slam. Pass Pass Pass

which led with two matches to go, but their close three-way finish with Hackett who had 4´ All Pass

remaining matches were against closest pur- beaten Jagger 17-13 VP. The boards were

suers, Irens and Hackett. This explosive deal generally forgettable but this deal was critical: Anticipating a more balanced hand in

severely dented their chances: dummy (because West had not made a

Game All. Dealer North. Hackett chanced his arm with the ™2 lead.

™ K72 t QJ74 return and exited with a diamond. Declarer

still had hopes of making his contract by

W E and endplaying a defender with his singleton

W E or doubleton club honour to give a ruff-and-

´ J85 discard. But it was much too late in the day

simply jumped to 6´ to give West a problem. also collected 400 the hard way against Zia send, Zia Mahmood, David Bakhshi 133

bound to be void in one of the minors, West big penalty at the other table to clinch the 3 . Peter Hawkes, Tim Rees, Ian Reissmann,

is looking at nothing in the majors and can’t trophy? John Howard, Mike Perkins, Andy