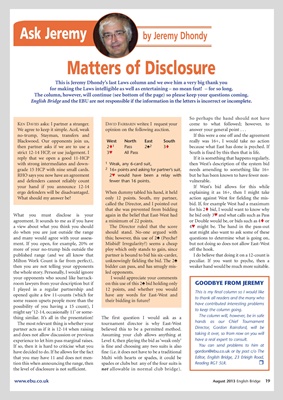 for making the Laws intelligible as well as entertaining – no mean feat! – for so long.

The column, however, will continue (see bottom of the page) so please keep your questions coming.

English Bridge and the EBU are not responsible if the information in the letters is incorrect or incomplete.

So perhaps the hand should not have

KEN DAVIES asks: I partner a stranger. DAVID FAIRBARIN writes: I request your come to what followed; however, to

We agree to keep it simple. Acol, weak opinion on the following auction. answer your general point . . .

no-trump, Stayman, transfers and If this were a one off and the agreement

Blackwood. Our opponents join us, West North East South really was 16+, I would take no action

then partner asks if we are to use a 2t1 Pass 2´2 3t because what East has done is psyched. If

reply that we open a good 11-HCP If it is something that happens regularly,

with strong intermediates and down- 1 Weak, any 6-card suit, then West’s description of the system bid

grade 15 HCP with nine small cards. 2 16+ points and asking for partner’s suit. needs amending to something like 16+

ergo defenders will be disadvantaged. When dummy tabled his hand, it held explaining it as 16+, then I might take

What should my answer be? only 12 points. South, my partner, action against West for fielding the mis-

called the Director, and I pointed out bid. If, for example West had a maximum

that she was prevented from bidding for his 2t bid, I would want to know why

agreement. It sounds to me as if you have a minimum of 22 points. or Double would be, or bids such as 4t or

a view about what you think you should The Director ruled that the score 4™ might be. The hand in the pass-out

do when you are just outside the range should stand. No-one argued with seat might also want to ask some of these

and many would agree with your assess- this; however, this use of 2´ (Psyche? questions to determine what is going on,

ment. If you open, for example, 20% or Misbid? Irregularity?) seems a cheap but not doing so does not allow East-West

more of your no-trump bids outside the ploy which only stands to gain, since off the hook.

published range (and we all know that partner is bound to bid his six-carder, I do believe that doing it on a 12-count is

Milton Work Count is far from perfect), unknowingly fielding the bid. The 2´ peculiar. If you want to psyche, then a

then you are not telling your opponents bidder can pass, and has smugly mis- weaker hand would be much more suitable.

the whole story. Personally, I would ignore led opponents.

your opponents who sound like barrack- I would appreciate your comments

I played in a regular partnership and 12 points, and whether you would

This is my final column so I would like

to thank all readers and the many who

some reason upsets people more than the their bidding in future?

possibility of you having a 15 count), I

to keep the column going.

thing similar. It’s all in the presentation! The first question I would ask as a The column will, however, be in safe

partner acts as if it is 12-14 when raising believed this to be a permitted method. Director, Gordon Rainsford, will be

and does not allow discussion or previous Assuming your club allows anything at taking it over, so from now on you will

experience to let him pass marginal raises. Level 4, then playing the bid as ‘weak only’ have a real expert to consult.

If so, then it is hard to criticise what you is fine and choosing any two suits is also You can send problems to him at

have decided to do. If he allows for the fact fine (i.e. it does not have to be a traditional gordon@ebu.co.uk or by post c/o The

that you may have 11 and does not men- Multi with hearts or spades, it could be Editor, English Bridge, 23 Erleigh Road,

tion this when announcing the range, then spades or clubs but any of the four suits is Reading RG1 5LR. r

the level of disclosure is not sufficient. not allowable in normal club bridge).