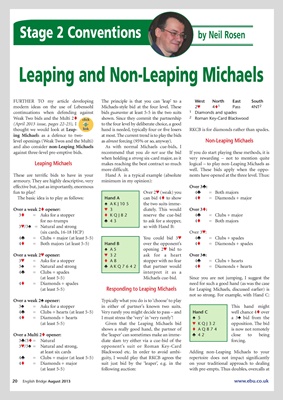 modern ideas on the use of Lebensohl Michaels-style bid at the four level. These 2™ 4t1 Pass 4NT2

thought we would look at Leap- link hand is needed, typically four or five losers RKCB is for diamonds rather than spades.

ing Michaels as a defence to two- at most. The current trend is to play the bids

level openings (Weak Twos and the Multi) as almost forcing (95% or so, anyway). Non-Leaping Michaels

and also consider non-Leaping Michaels As with normal Michaels cue-bids, I

against three-level pre-emptive bids. recommend that you do not use the bid If you do start playing these methods, it is

when holding a strong six-card major, as it very rewarding – not to mention quite

more difficult. well. These bids apply when the oppo-

These are terrific bids to have in your Hand A is a typical example (absolute nents have opened at the three level. Thus:

armoury. They are highly descriptive, very minimum in my opinion):

effective but, just as importantly, enormous Over 3®:

The basic idea is to play as follows: Hand A can bid 4t to show 4t = Diamonds + major

(at least 5-5) Michaels cue-bid. Since you are not jumping, I suggest the

not so strong. For example, with Hand C:

Over a weak 2´ opener: Typically what you do is to ‘choose’ to play

3´ = Asks for a stopper in either of partner’s known two suits. This hand might

(at least 5-5) Given that the Leaping Michaels bid ™ KQJ32 opposition. The bid

shows a really good hand, the partner of t AQ874 is now not remotely

Over a Multi 2t opener: the ‘leaper’ can sometimes make an imme- ® 42 close to being

3®/3t = Natural diate slam try either via a cue-bid of the forcing.

at least six cards Blackwood etc. In order to avoid ambi- Adding non-Leaping Michaels to your

4® = Clubs + major (at least 5-5) guity, I would play that RKCB agrees the repertoire does not impact significantly

4t = Diamonds + major suit just bid by the ‘leaper’, e.g. in the on your traditional approach to dealing

(at least 5-5) following auction: with pre-empts. Thus doubles, overcalls at