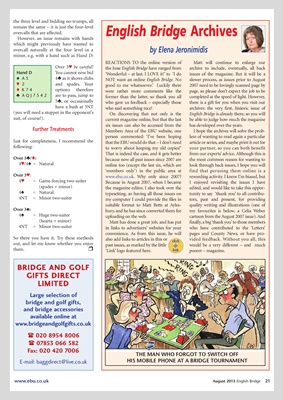 the three level and bidding no-trumps, all

remain the same – it is just the four-level

overcalls that are affected.

However, an issue remains with hands

overcall naturally at the four level in a by Elena Jeronimidis

Over 3™ be careful! the June English Bridge have ranged from archive to include, eventually, all back

Hand D You cannot now bid ‘Wonderful – at last. I LOVE it!’ to ‘I do issues of the magazine. But it will be a

´ A5 4® as it shows clubs NOT want an online English Bridge. No slower process, as issues prior to August

™ 2 and spades. Your good to me whatsoever.’ Luckily there 2007 need to be lovingly scanned page by

t K74 options therefore were rather more comments like the page, so please don’t expect the job to be

® AQJ7542 are to pass, jump to former than the latter, so thank you all completed at the speed of light. However,

5®, or occasionally who gave us feedback – especially those there is a gift for you when you visit our

have a bash at 3NT who said something nice! archives: the very first, historic issue of

(you will need a stopper in the opponent’s On discovering that not only is the English Bridge is already there, so you will

suit, of course!). current magazine online, but that the last be able to judge how much the magazine

six issues can also be accessed from the has developed over the years.

Further Treatments Members Area of the EBU website, one I hope the archives will solve the prob-

person commented: ‘I’ve been hoping lem of wanting to read again a particular

Just for completeness, I recommend the that the EBU would do that – I don’t need article or series, and maybe print it out for

following: to worry about keeping my old copies!’ your partner, so you can both benefit

That is indeed the case, and it gets better from our experts’ advice. Although this is

Over 3®/t: because now all past issues since 2007 are the most common reason for wanting to

4™/4´ = Natural online too (except the last six, which are look through back issues, I hope you will

4™ = Game-forcing two-suiter Because in August 2007, when I became I enjoyed revisiting the issues I have

(spades + minor) the magazine editor, I also took over the edited, and would like to take this oppor-

4´ = Natural typesetting, so having all those issues on tunity to say ‘thank you’ to all contribu-

4NT = Minor two-suiter my computer I could provide the files in tors, past and present, for providing

Over 3´: bury, and he has since converted them for my favourites is below, a Celia Weber

(hearts + minor) Matt has done a great job, and has put finally, a big ‘thank you’ to those members

convenience. As from this issue, he will pages and County News, or have pro-

So there you have it. Try these methods also add links to articles in this or click vided feedback. Without you all, this

out, and let me know whether you enjoy past issues, as marked by the little would be a very different – and much

THE MAN WHO FORGOT TO SWITCH OFF

E-mail: baggdirect@live.co.uk HIS MOBILE PHONE AT A BRIDGE TOURNAMENT