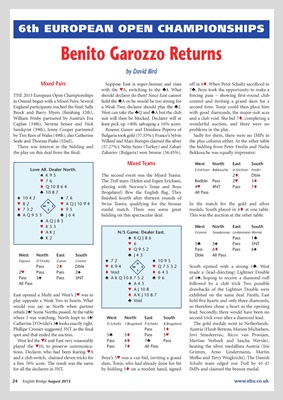 Mixed Pairs Suppose East is super-human and rises off in 6t. When Peter Schaltz sacrificed in

with the ™A, switching to the ®4. What 7®, Boye took the opportunity to make a

THE 2013 European Open Championships should declarer do then? Since East cannot forcing pass – showing first-round club

in Ostend began with a Mixed Pairs. Several hold the ®A or he would be too strong for control and inviting a grand slam for a

England participants reached the final: Sally a Weak Two, declarer should play the ®2. second time. Tonje could then place him

Brock and Barry Myers (finishing 12th), West can take the ®Q and ®A but the club with good diamonds, the major-suit aces

William Frisby partnered by Austria’s Eva suit will then be blocked. Declarer will at and a club void. She bid 7t, completing a

Caplan (34th), Nevena Senior and Nick least pick up +400, salvaging a 16% score. wonderful auction, and there were no

by Tim Rees of Wales (49th), also Catherine Bulgaria took gold (57.55%); France’s Sylvie Sadly for them, there were no IMPs in

Seale and Thomas Paske (52nd). Willard and Marc Bompis claimed the silver the plus column either. At the other table

There was interest in the bidding and (57.27%); Netsy Sayer (Turkey) and Zahari the bidding from Peter Fredin and Nadia

the play on this deal from the final: Zahariev (Bulgaria) won bronze (56.45%). Bekkouche was equally impressive:

´ K95 The second event was the Mixed Teams. 2t Dble

® AQ953 ® J64 bidding on this spectacular deal: This was the auction at the other table:

All Pass ´ A43 followed by a club trick Two possible

™ A J 10 8 drawbacks of the Lightner Double were

play opposite a Weak Two in hearts. What ® Void held five hearts and only three diamonds,

rebids 2´? Some Norths passed. At the table lead. Secondly, there would have been no

where I was watching, North leapt to 4´! West North East South second trick even after a diamond lead.

tions. Declarer, who had been fearing ™A Grümm, Arno Lindermann, Martin

and a club switch, claimed eleven tricks for Boye’s 5™ was a cue-bid, inviting a grand Shifko and Terry Weigkricht). The Danish

a fine 76% score. The result was the same slam. Tonje, who had already done her bit Schaltz team edged out Troll by 61-47

for all the declarers in 3NT. by bidding 5t on a modest hand, signed IMPs and claimed the bronze medal.