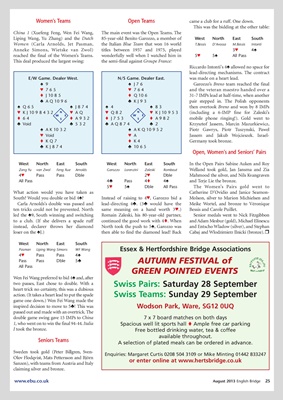 Women’s Teams Open Teams came a club for a ruff. One down.

This was the bidding at the other table:

reached the final of the Women’s Teams. wonderfully well when I watched him in 5™ 5´ All Pass

This deal produced the largest swing: the semi-final against Groupe France:

Riccardo Intonti's 4´ allowed no space for

South? Would you double or bid 4´? Instead of raising to 4™, Garozzo bid a Molson, silver to Marion Michielsen and

Carla Arnolds’s double was passed and lead-directing 4®. (3® would have the Meike Wortel, and bronze to Véronique

ten tricks could not be prevented. North same meaning on a hand worth 3™.) Bessis and Carole Puillet.

to a club. (If she delivers a spade ruff continued the good work with 4t. When and Adam Mesbur (gold), Michael Elinescu

instead, declarer throws her diamond North took the push to 5´, Garozzo was and Entscho Wladow (silver), and Stephan

loser on the ´J.) then able to find the diamond lead! Back Cabaj and Wlodzimierz Ilnicki (bronze). r

Wen Fei Wang preferred to bid 4´ and, after

two passes, East chose to double. With a

heart trick no certainty, this was a dubious

game one down.) Wen Fei Wang made the

inspired decision to move to 5®! This was Wodson Park, Ware, SG12 0UQ

passed out and made with an overtrick. The

Seniors Teams A selection of plated meals can be ordered in advance.

Sanzen), with teams from Austria and Italy or enter online at www.hertsbridge.co.uk