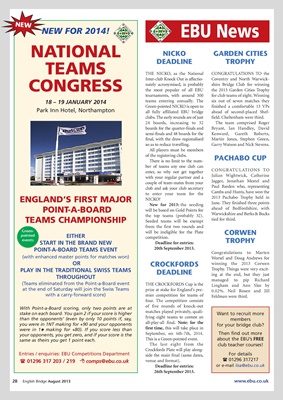 TEAMS THE NICKO, as the National

Inter-club Knock Out is affectio-

the most popular of all EBU

for club teams of eight. Winning

Green-pointed NICKO is open to finished a comfortable 13 VPs

clubs. The early rounds are of just field. Cheltenham were third.

boards for the quarter-finals and Bryant, Ian Handley, David

semi-finals and 48 boards for the Kenward, Gareth Roberts,

so as to reduce travelling. Garry Watson and Nick Stevens.

All players must be members

of the registering clubs.

There is no limit to the num- PACHABO CUP

ber of teams any one club can

enter, so why not get together CONGRATULATIONS TO

with your regular partner and a Julian Wightwick, Catherine

couple of team-mates from your Jagger, Jonathan Mestel and

club and ask your club secretary Paul Barden who, representing

to enter your team for the Cambs and Hunts, have won the

New for 2013: the seeding June. They finished three points

POINT-A-BOARD will be based on Gold Points for ahead of Bedfordshire, with

TEAMS CHAMPIONSHIP Seeded teams will be exempt tied for third.

from the first two rounds and

will be ineligible for the Plate CORWEN

START IN THE BRAND NEW Deadline for entries: TROPHY

OR CROCKFORDS winning the 2013 Corwen

DEADLINE ing at the end, but they just

THROUGHOUT managed to pip Richard

at the end of Saturday will join the Swiss Teams prize at stake for England’s pre- 0.02%. Neil Rosen and Jill

with a carry-forward score) mier competition for teams of Feldman were third.

of five rounds of knock-out

With Point-a-Board scoring, only two points are at

stake on each board. You gain 2 if your score is higher matches played privately, quali- Want to recruit more

than the opponents’ (even by only 10 points if, say, fying eight teams to contest an

you were in 1NT making for +90 and your opponents all-play-all final. Note: for the

for your bridge club?

were in 1´ making for +80). If you score less than first time, this will take place in

your opponents, you get zero, and if your score is the September, on 6th-7th, 2014. Then find out more

same as theirs you get 1 point each. This is a Green-pointed event. about the EBU’s FREE

The last eight from the club teacher courses!

Crockfords Plate will play along-

Deadline for entries: or e-mail lisa@ebu.co.uk