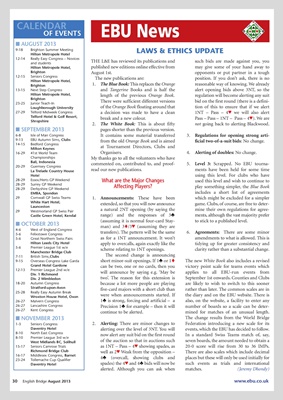 and students THE L&E has reviewed its publications and such bids are made against you, you

Hilton Metropole Hotel, published new editions online effective from may give some of your hand away to

Brighton August 1st. opponents or put partner in a tough

The new publications are: position. If you don’t ask, there is no

Brighton 1. The Blue Book: This replaces the Orange reasonable way of knowing. We already

13-15 Next Step Congress and Tangerine Books and is half the alert opening bids above 3NT, so the

2. The White Book: This is about fifty not going back to alerting Blackwood.

Championships My thanks go to all the volunteers who have

commented on, contributed to, and proof- 5. Level 3: Scrapped. No EBU tourna-

La Trelade Country House read our new publications. ments have been held for some time

Hotel using this level. For clubs who have

29 Cornwall GP Swiss Teams 1. Announcements: These have been which might be excluded for a simpler

White Hart Hotel, extended, so that you will now announce game. Clubs, of course, are free to deter-

Castle Green Hotel, Kendal range) and the responses of 3® ments, although the vast majority prefer

(assuming it is normal four-card Stay- to stick to a published level.

5-6 Felixstowe Congress transfers). The pattern will be the same 6. Agreements: There are some minor

5-6 Great Northern Swiss Pairs as for a 1NT announcement. It won’t amendments to what is allowed. This is

Hilton Leeds City Hotel apply to overcalls, again exactly like the tidying up for greater consistency and

scheme relating to 1NT openings. clarity rather than a substantial change.

Grand Hotel Gardone can be two, one or no cards, then you victory point scale for teams events which

will announce by saying e.g. ‘May be applies to all EBU-run events from

Div. 2 Wimbledon two’. The reason for this extension is September 1st onwards. Counties and Clubs

Stratford-upon-Avon five-card majors with a short club than rather than later. The common scales are in

Wroxton House Hotel, Oxon were when announcements started. If the diary and on the EBU website. There is

26-27 Malvern Congress 1® is strong, forcing and artificial – a also, on the website, a facility to enter any

continue to be alerted. mined for matches of an unusual length.

n NOVEMBER 2013 The change results from the World Bridge

1-3 Seniors Congress 2. Alerting: There are minor changes to Federation introducing a new scale for its

Daventry Hotel alerting over the level of 3NT. You will events, which the EBU has decided to follow.

now alert any suit bid on the first round In a standard Swiss Teams match of, say,

West Midlands BC, Solihull of the auction so that in auctions such seven boards, the amount needed to obtain a

4® (overcall, showing clubs and places but these will only be used initially for

alerted. Although you can ask when matches. (Jeremy Dhondy)