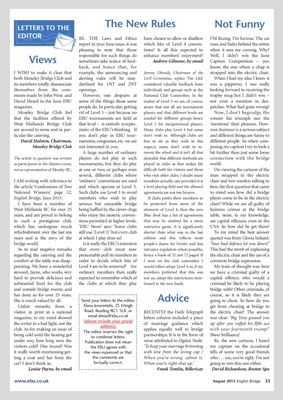 LETTERS TO THE The New Rules Not Funny

EDITOR RE. THE Laws and Ethics have chosen to allow or disallow I’M fizzing. I’m furious. The cat

report in your June issue, it was which bits of Level 4 conven- runs and hides behind the settee

pleasing to note that those tions? Is all this expected to when it sees me coming. Why?

responsible for such things do enhance members’ enjoyment? Well, I didn’t win the June

back, and hence that, for know, the one where a chap is

I WISH to make it clear that example, the announcing and Jeremy Dhondy, Chairman of the strapped into the electric chair.

both Moseley Bridge Club and alerting rules will be stan- L&E Committee, replies: The L&E When I had my idea I knew it

its members totally disassociate dardised for 1NT and 2NT considered valuable feedback from was a pipperoo. I was really

themselves from the com- openings. individuals and groups such as the looking forward to receiving the

ments made by John West and However, one despairs at National Club Committee. In the trophy mug but I didn’t win –

David Heard in the June EBU some of the things those same matter of Level 3 we are, of course, not even a mention in des-

magazine. people do. In particular, getting aware that not all are tournament patches. What had gone wrong?

Moseley Bridge Club feel rid of Level 3 – just because no players and that different levels are Now, I don’t begrudge the

are second to none and in par- matic of the EBU’s thinking. If Many clubs play Level 4 but some ever, humour is a serious subject

ticular the catering. you don’t play in EBU tour- don’t wish to. Although clubs are and different things are funny to

David Hulston, Chairman, naments, congresses, etc. we are free to do as they wish in this different people. So when com-

Moseley Bridge Club not interested in you. respect, many don’t wish to re- posing my caption I try to look a

as participants to the Masters event, tournaments, but they do play played in clubs as that makes life world.

not as representatives of Moseley BC. at one or two, or perhaps even difficult both for visitors and those On viewing the cartoon of the

several, different clubs where who visit other clubs. I doubt many man strapped in the electric

the article ‘Confessions of Two and which operate at Level 3. a level playing field and the allowed him, the first question that came

National Winners’, page 12, Such clubs use Level 3 to avoid agreements are not too bizarre. to mind was: how did a bridge

English Bridge, June 2013. members who wish to play If clubs prefer their members to player come to be in the electric

I have been a member of serious but enjoyable bridge be protected from some of the chair? While we are all guilty of

West Midlands BC for over 25 being baffled by the clever clogs elements of Level 4, then the new heinous crimes at the bridge

years, and am proud to belong who enjoy the esoteric conven- Blue Book has a list of agreements table, none, to my knowledge,

to such a prestigious club, tions permitted at higher levels. that may be omitted for a more are capital offences, even in the

which has undergone much ‘EBU News’ says: ‘Some clubs restrictive game. It is significantly USA. So how did he get there?

years and is the envy of the at which I play does so! edition and this reflects most quoted was from Gloria Ireland:

bridge world. Is it really the EBU’s intention people’s desire for briefer and less ‘Your bad defence let you down!’

So to read negative remarks that every club must now intrusive regulation where possible, This had the merit of explaining

regarding the catering and the presumably poll its members in hence a book of 32 not 72 pages! If the electric chair and the use of a

comfort at the table was disap- order to decide which bits of I were on the club committee I common bridge expression.

pointing. We have a wonderful Level 4 are to be removed? Are would either adopt Level 4 or, if my My train of thought was: here

steward, Jayne, who works very ordinary members then really members preferred that this was we have a criminal guilty of a

hard to provide delicious and expected to remember which of not so, adopt the restrictions men- capital offence; who would a

substantial food for the club the clubs at which they play tioned in the new book. criminal be likely to be playing

and outside bridge events, and bridge with? Other criminals, of

has done so for over 25 years. course, so it is likely they are

She is much valued by all. Send your letters to the editor, Advice going to cheat. So how do you

Unfair remarks from a Elena Jeronimidis, 23 Erleigh get from cheating at bridge to

visitor, in print in a national Road, Reading RG1 5LR, or RECENTLY the Daily Telegraph the electric chair? The answer

the writer in a bad light, not the of marriage guidance which up after you ruffed his fifth ace

club. As for making an issue of applies equally well to bridge with your fourteenth trump!’

being cold until the heating got to condense letters. partnerships. It is in the form of Sheer brilliance!

under way, how long were the Publication does not mean verse attributed to Ogden Nash: Re. the new cartoon, I based

visitors cold? One round? Was the EBU agrees with ‘To keep your marriage brimming my caption on the occasional

ting a coat and hat from the the comments are When you’re wrong admit it. who . . . yes, you’re right. I’m not

car? I don’t think so. factually correct. When you’re right shut up.’ going to win this one either.