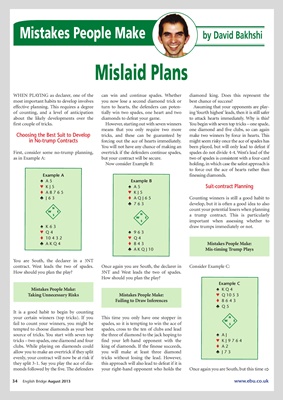 WHEN PLAYING as declarer, one of the can win and continue spades. Whether diamond king. Does this represent the

most important habits to develop involves you now lose a second diamond trick or best chance of success?

effective planning. This requires a degree turn to hearts, the defenders can poten- Assuming that your opponents are play-

of counting, and a level of anticipation tially win two spades, one heart and two ing ‘fourth highest’ leads, then it is still safer

about the likely developments over the diamonds to defeat your game. to attack hearts immediately. Why is this?

first couple of tricks. However, starting out with seven winners You begin with seven top tricks – one spade,

means that you only require two more one diamond and five clubs, so can again

Choosing the Best Suit to Develop tricks, and these can be guaranteed by make two winners by force in hearts. This

in No-trump Contracts forcing out the ace of hearts immediately. might seem risky once the ace of spades has

You will not have any chance of making an been played, but will only lead to defeat if

First, consider some no-trump planning, overtrick if the defenders continue spades, spades do not divide 4-4. West’s lead of the

as in Example A: but your contract will be secure. two of spades is consistent with a four-card

Now consider Example B: holding, in which case the safest approach is

to force out the ace of hearts rather than

count your potential losers when planning

S N a trump contract. This is particularly

S important when assessing whether to

´ K63 draw trumps immediately or not.

You are South, the declarer in a 3NT

contract. West leads the two of spades. Once again you are South, the declarer in Consider Example C:

How should you plan the play? 3NT and West leads the two of spades.

How should you plan the play?

It is a good habit to begin by counting

your certain winners (top tricks). If you This time you only have one stopper in N

fail to count your winners, you might be spades, so it is tempting to win the ace of S

tempted to choose diamonds as your best spades, cross to the ten of clubs and lead

source of tricks. You start with seven top the three of diamond to the jack hoping to ´ AJ

tricks – two spades, one diamond and four find your left-hand opponent with the ™ KJ9764

clubs. While playing on diamonds could king of diamonds. If the finesse succeeds, t A2

evenly, your contract will now be at risk if tricks without losing the lead. However,

they split 3-1. Say you play the ace of dia- this approach will also lead to defeat if it is

monds followed by the five. The defenders your right-hand opponent who holds the Once again you are South, but this time 