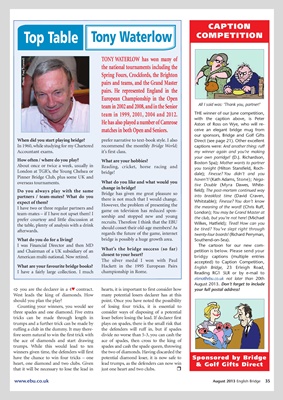 TONY WATERLOW has won many of

the national tournaments including the

pairs and teams, and the Grand Master

pairs. He represented England in the

European Championship in the Open

All I said was: ‘Thank you, partner!’

with the caption above, is Peter

He has also played a number of Camrose Aston of Ross on Wye, who will re-

matches in both Open and Seniors. ceive an elegant bridge mug from

our sponsors, Bridge and Golf Gifts

When did you start playing bridge? prefer narrative to text-book style. I also Direct (see page 21). Other excellent

In 1960, while studying for my Chartered recommend the monthly Bridge World; captions were: And another thing: ruff

your own porridge! (D.J. Richardson,

How often / where do you play? What are your hobbies? Boston Spa); Mother wants to partner

About once or twice a week, usually in Reading, cricket, horse racing and you tonight (Hilton Stansfield, Roch-

London at TGR’s, the Young Chelsea or bridge! dale); Finesse? You didn’t and you

overseas tournaments. What do you like and what would you

Do you always play with the same field); The post-mortem continued way

Bridge has given me great pleasure so into breakfast time (David Craven,

partners / team-mates? What do you

there is not much that I would change. Whitstable); Finesse? You don’t know

However, the problem of presenting the the meaning of the word! (Chris Ruff,

I have two or three regular partners and

game on television has reduced spon- London); You may be Grand Master at

team-mates – if I have not upset them! I

sorship and stopped new and young the club, but you’re not here! (Michael

prefer courtesy and little discussion at

recruits. Therefore I think that the EBU Wilkes, Hatfield); Tired! How can you

the table, plenty of analysis with a drink

should cosset their old-age members! As be tired? You’ve slept right through

What do you do for a living? bridge is possibly a huge growth area. Southend-on-Sea).

and Chairman of a UK subsidiary of an What’s the bridge success (so far) petition is below. Please send your

The silver medal I won with Paul accepted) to Caption Competition,

What are your favourite bridge books? Hackett in the 1995 European Pairs English Bridge, 23 Erleigh Road,

I have a fairly large collection. I much championship in Rome. Reading RG1 5LR or by e-mail to

 you are the declarer in a 4™ contract. hearts, it is important to first consider how your full postal address!

West leads the king of diamonds. How many potential losers declarer has at this

should you plan the play? point. Once you have noted the possibility

Counting your winners, you would see of losing four tricks, it is essential to

three spades and one diamond. Five extra consider ways of disposing of a potential

tricks can be made through length in loser before losing the lead. If declarer first

trumps and a further trick can be made by plays on spades, there is the small risk that

ruffing a club in the dummy. It may there- the defenders will ruff in, but if spades

fore seem natural to win the first trick with divide no worse than 5-3, you can cash the

the ace of diamonds and start drawing ace of spades, then cross to the king of

trumps. While this would lead to ten spades and cash the spade queen, throwing

winners given time, the defenders will first the two of diamonds. Having discarded the

have the chance to win four tricks – one potential diamond loser, it is now safe to Sponsored by Bridge

heart, one diamond and two clubs. Given lead trumps, as the defenders can now win & Golf Gifts Direct

that it will be necessary to lose the lead in just one heart and two clubs. r