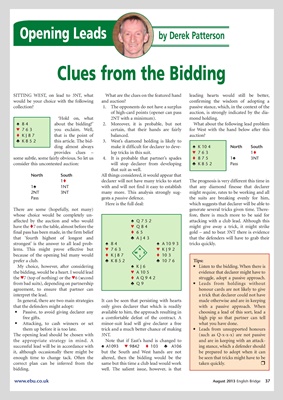 Clues from the Bidding

SITTING WEST, on lead to 3NT, what What are the clues on the featured hand leading hearts would still be better,

would be your choice with the following and auction? confirming the wisdom of adopting a

collection? 1. The opponents do not have a surplus passive stance, which, in the context of the

of high-card points (opener can pass auction, is strongly indicated by the dia-

‘Hold on, what 2NT with a minimum). mond holding.

´ 84 about the bidding?’ 2. Moreover, it is probable, but not What about the following lead problem

™ 763 you exclaim. Well, certain, that their hands are fairly for West with the hand below after this

t KJ87 that is the point of balanced. auction?

that suit as well.

North South All things considered, it would appear that

2NT 3NT many more. This analysis strongly sug- might require, rates to be working and all

Pass gests a passive defence. the suits are breaking evenly for him,

Here is the full deal: which suggests that declarer will be able to

There are some (hopefully, not many) generate several tricks given time. There-

whose choice would be completely un- fore, there is much more to be said for

affected by the auction and who would ´ Q752 attacking with a club lead. Although this

have the t7 on the table, almost before the ™ Q84 might give away a trick, it might strike

final pass has been made, in the firm belief t 65 gold – and to beat 3NT there is evidence

My choice, however, after considering ´ KJ6 • Listen to the bidding. When there is

the bidding, would be a heart. I would lead ™ A 10 5 evidence that declarer might have to

from bad suits), depending on partnership ® Q9 • Leads from holdings without

agreement, to ensure that partner can honour cards are not likely to give

interpret the lead. a trick that declarer could not have

In general, there are two main strategies It can be seen that persisting with hearts made otherwise and are in keeping

that the defenders might adopt: only gives declarer that which is readily with a passive approach. When

• Passive, to avoid giving declarer any available to him, the approach resulting in choosing a lead of this sort, lead a

free gifts. a comfortable defeat of the contract. A high pip so that partner can tell

• Attacking, to cash winners or set minor-suit lead will give declarer a free what you have done.

them up before it is too late. trick and a much better chance of making • Leads from unsupported honours

The opening lead should be chosen with 3NT. (such as Q-x-x-x) are not passive

the appropriate strategy in mind. A Note that if East’s hand is changed to and are in keeping with an attack-

it, although occasionally there might be but the South and West hands are not be prepared to adopt when it can

enough time to change tack. Often the altered, then the bidding would be the be seen that tricks might have to be

correct plan can be inferred from the same but this time a club lead would work taken quickly. r

bidding. well. The salient issue, however, is that