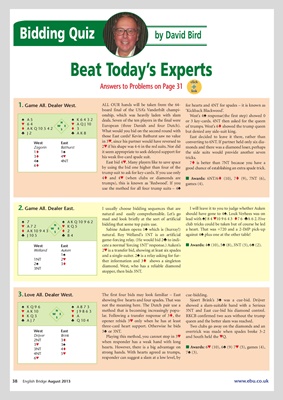 Answers to Problems on Page 31 link

1. Game All. Dealer West. ALL OUR hands will be taken from the 64- for hearts and 4NT for spades – it is known as

board final of the USA’s Vanderbilt champi- ‘Kickback Blackwood’.

What would you bid on the second round with but denied any side-suit king.

those East cards? Kevin Bathurst saw no value East decided to leave it there, rather than

West East in 3™, since his partner would have reversed to converting to 6NT. If partner held only six dia-

Zagorin Bathurst 2™ if his shape was 4-6 in the red suits. Nor did monds and there was a diamond loser, perhaps

4´ 4NT East bid 4™. Many players like to save space 7t is better than 7NT because you have a

by using the bid one higher than four of the good chance of establishing an extra spade trick.

trump suit to ask for key-cards. If you use only

use the method for all four trump suits – 4´

2. Game All. Dealer East. I usually choose bidding sequences that are I will leave it to you to judge whether Auken

natural and easily comprehensible. Let’s go should have gone to 4´. Louk Verhees was on

N bidding that some top pairs use. club tricks could be taken but of course he led

game-forcing relay. (He would bid 2® to indi-

diamond. West, who has a reliable diamond

showing five hearts and four spades. That was Sjoert Brink’s 3´ was a cue-bid. Drijver

´ KQ96 ´ A873 not the meaning here. The Dutch pair use a showed a slam-suitable hand with a Serious

t KQ3 S t A lar. Following a transfer response of 3t, the RKCB confirmed two aces without the trump

three-card heart support. Otherwise he bids Two clubs go away on the diamonds and an

West East 3´ or 3NT. overtrick was made when spades broke 3-2

Drijver Brink Playing this method, you cannot stop in 3™ and South held the ™Q.

2NT 3t when responder has a weak hand with long

6™ responder can suggest a slam at a low level, by