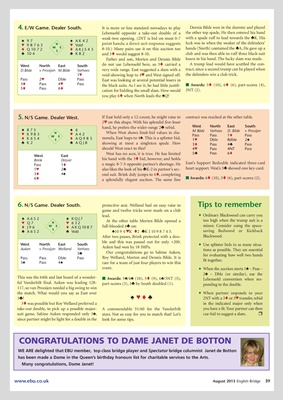 4. E/W Game. Dealer South. It is more or less standard nowadays to play Dennis Bilde won in the dummy and played

Lebensohl opposite a take-out double of a the other top spade, He then entered his hand

weak-two opening. (2NT is bid on most 0-7 with a spade ruff to lead towards the ®K. His

™ Void point hands; a direct suit response suggests luck was in when the weaker of the defenders’

Father and son, Morten and Dennis Bilde losers in his hand. The lucky slam was made.

West North East South do not use Lebensohl here, so 3t carried a A trump lead would have scuttled the con-

D.Bilde v Prooijen M.Bilde Verhees very wide range. East suggested a slam with a tract, since a second trump can be played when

1™ void-showing leap to 4™ and West signed off. the defenders win a club trick.

cation for bidding the small slam. How would

you play 6t when North leads the ´Q?

5. N/S Game. Dealer West. If East held only a 12-count, he might raise to contract was reached at the other table.

2™ on this shape. With his splendid five-loser

™ A42 When West shows limit-bid values in dia-

should West react to this? 4™ Pass 4NT Pass

Brink Drijver his hand with the 3t bid, however, and holds

game and twelve tricks were made on a club

lead. • Ordinary when the trumpcarry you

At the other table Morten Bilde opened a

After two passes, Brink protected with a dou- Blackwood.

Verhees Auken had won by 18 IMPs. • Use splinter bids They are essential

in as many situa-

3® Our congratulations go to Sabine Auken,

for evaluating how well two hands

• When the auctionsimilar), use the

117, so van Prooijen needed a big swing to win

the match. What would you say as East over

• 2NT with a 3t orresponds to rebid

take-out double, to pick up a possible major- A commendable 51/60 for the Vanderbilt you have a fit. Your partner can then

suit game. Sabine Auken responded only 3´, stars. Not so easy for you to match that! Let’s cue-bid to suggest a slam. r

since partner might be light for a double in the look for some tips.

has been made a Dame in the Queen’s birthday honours list for charitable services to the Arts.