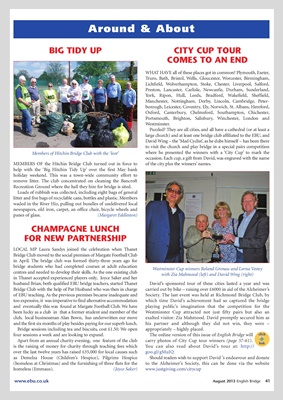 COMES TO AN END

WHAT HAVE all of these places got in common? Plymouth, Exeter,

Puzzled? They are all cities, and all have a cathedral (or at least a

large church) and at least one bridge club affiliated to the EBU, and

David Wing – the ‘Mad Cyclist’, as he dubs himself – has been there

occasion. Each cup, a gift from David, was engraved with the name

MEMBERS OF the Hitchin Bridge Club turned out in force to of the city plus the winners’ names.

holiday weekend. This was a town-wide community effort to

remove litter. The club concentrated on cleaning the Bancroft

Recreation Ground where the hall they hire for bridge is sited.

Loads of rubbish was collected, including eight bags of general

waded in the River Hiz, pulling out bundles of undelivered local

in April. The bridge club was formed thirty-three years ago for

centres and needed to develop their skills. As the one existing club with Zia Mahmood (left) and David Wing (right)

in Thanet accepted experienced players only, Joyce Saker and her

husband Brian, both qualified EBU bridge teachers, started Thanet David’s sponsored tour of these cities lasted a year and was

of EBU teaching. As the previous premises became inadequate and Society. The last event was held at Richmond Bridge Club, by

too expensive, it was imperative to find alternative accommodation which time David’s achievement had so captured the bridge

and eventually this was found at Margate Football Club. We have playing public’s imagination that the competition for the

and the first six months of play besides paying for our superb lunch. his partner and although they did not win, they were –

four sessions a week and are looking to expand. The online version of this issue of English Bridge will click

Apart from an annual charity evening, one feature of the club carry photos of City Cup tour winners (page 57-61).

is the raising of money for charity through teaching fees which You can also read about David’s tour at: http://

over the last twelve years has raised £35,000 for local causes such goo.gl/gMuJQ

(homeless at Christmas) and the furnishing of three flats for the to the Alzheimer’s Society, this can be done via the website