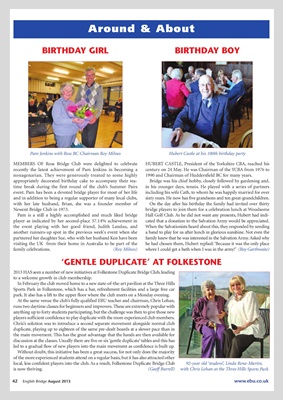 MEMBERS OF Ross Bridge Club were delighted to celebrate HUBERT CASTLE, President of the Yorkshire CBA, reached his

recently the latest achievement of Pam Jenkins in becoming a century on 24 May. He was Chairman of the YCBA from 1976 to

nonagenarian. They were generously treated to some highly 1990 and Chairman of Huddersfield BC for many years.

appropriately decorated birthday cake to accompany their tea- Bridge was his chief hobby, closely followed by gardening and,

time break during the first round of the club’s Summer Pairs in his younger days, tennis. He played with a series of partners

event. Pam has been a devoted bridge player for most of her life including his wife Cath, to whom he was happily married for over

and in addition to being a regular supporter of many local clubs, sixty years. He now has five grandsons and ten great-grandchildren.

with her late husband, Brian, she was a founder member of On the day after his birthday the family had invited over thirty

Newent Bridge Club in 1973. bridge players to join them for a celebration lunch at Woodsome

Pam is a still a highly accomplished and much liked bridge Hall Golf Club. As he did not want any presents, Hubert had indi-

player as indicated by her second-place 57.14% achievement in cated that a donation to the Salvation Army would be appreciated.

the event playing with her good friend, Judith Landau, and When the Salvationists heard about this, they responded by sending

another runners-up spot in the previous week's event when she a band to play for us after lunch in glorious sunshine. Not even the

partnered her daughter Sue, who with her husband Ken have been family knew that he was interested in the Salvation Army. Asked why

visiting the UK from their home in Australia to be part of the he had chosen them, Hubert replied: ‘Because it was the only place

family celebrations. (Roy Milnes) where I could get a bath when I was in the army!’ (Roy Garthwaite)

2013 HAS seen a number of new initiatives at Folkestone Duplicate Bridge Club, leading

to a welcome growth in club membership.

Sports Park in Folkestone, which has a bar, refreshment facilities and a large free car

park. It also has a lift to the upper floor where the club meets on a Monday evening.

runs two daytime classes for beginners and improvers. These are extremely popular with

anything up to forty students participating, but the challenge was then to give those new

duplicate, playing up to eighteen of the same pre-dealt boards at a slower pace than in

the main movement. This has the great advantage that the hands are then available for

discussion at the classes. Usually there are five or six ‘gentle duplicate’ tables and this has

led to a gradual flow of new players into the main movement as confidence is built up.

Without doubt, this initiative has been a great success, for not only does the majority

of the more experienced students attend on a regular basis, but it has also attracted other