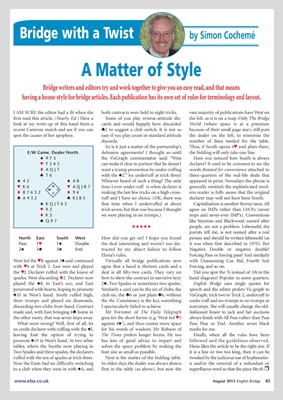 A Matter of Style

Bridge writers and editors try and work together to give you an easy read, and that means

having a house-style for bridge articles. Each publication has its own set of rules for terminology and layout.

I AM SURE the editor had a fit when she both contracts were held to eight tricks. vast majority of publications have West on

first read this article. (Nearly. Ed.) Have a Some of you play reverse-attitude dis- the left, as it is on a map. Only The Bridge

recent Camrose match and see if you can ®2 to suggest a club switch. It is not so because of their small page size), still puts

spot the causes of her apoplexy. easy if you play count or standard attitude the dealer on the left, to minimise the

discards. number of lines needed for the table.

So is it just a matter of the partnership’s Thus, if South opens 4™ and plays there,

E/W Game. Dealer North. defensive agreements? I thought so until the bidding will only take one line.

´ 975 the VuGraph commentator said: “West Have you noticed how South is always

™ T543 can make it clear to partner that he doesn’t declarer? It used to be common to see the

® T6 with the ´2.” An underruff at trick three! three-quarters of the real-life deals that

´ 42 ´ A8 Whoever heard of such a thing? The only appeared in print. Nowadays the phrase is

™ K6 N ™ AQJ87 time I ever under-ruff is when declarer is generally omitted; the sophisticated mod-

´ KQJT63 that time when I underruffed at about Capitalisation is another thorny issue. All

™ 92 trick seven, but that was because I thought agree on IMPs rather than I.M.P.s (never

t K5 we were playing in no trumps.) imps and never-ever IMP’s). Conventions

HHHHH people, are not a problem. Lebensohl, the

purists tell me, is not named after a real

North East South West How did you get on? I hope you found person and should be written lebensohl (as

Pass 1™ 1´ Double the deal interesting and weren’t too dis- it was when first described in 1970). But

2´ 3® 3´ End tracted by my abject failure to follow Negative Double or negative double?

with ™6 at Trick 2. East won and played agree that a hand is thirteen cards and a Forcing, and so on.

the ™J. Declarer ruffed with the knave of deal is all fifty-two cards. They vary on Did you spot the Ts instead of 10s in the

spades, West discarding t2. Declarer now how to show the contract in narrative text: hand diagram? Popular in some quarters.

persevered with hearts, hoping to promote Similarly a card can be the six of clubs, the speech and the editor prefers Vu-graph to

drew trumps and played on diamonds, the the. Consistency is the key, something under-ruff and no-trumps to no trumps or

discarding two clubs from hand. Contract I spectacularly failed to achieve. notrumps. She will usually change the old-

made and, with East bringing 4® home in Mr Forrester of The Daily Telegraph fashioned knave to jack and her auctions

the other room, that was seven imps away. goes for the short forms (e.g. ‘West led ™5 always finish with All Pass rather than Pass

What went wrong? Well, first of all, let against 4´’), and thus creates more space Pass Pass or End. Another seven black

us credit declarer with ruffing with the ´J, for his words of wisdom. Mr Robson of marks for me.

leaving East the option of trying to The Times prefers longer forms. He too Finally, when all the rules have been

promote ´10 in West’s hand. At two other has lots of good advice to impart and followed and the guidelines observed,

tables, where the Souths were playing in solves the space problem by making the Elena likes the article to be the right size. If

Two Spades and three spades, the declarers font size as small as possible. it is a line or two too long, then it can be

ruffed with the ten of spades at trick three. Next is the matter of the bidding table. tweaked by the judicious use of hyphenatio-

to a club when they were in with ´A, and first in the table (as above), but now the superfluous word so that the piece fits th r