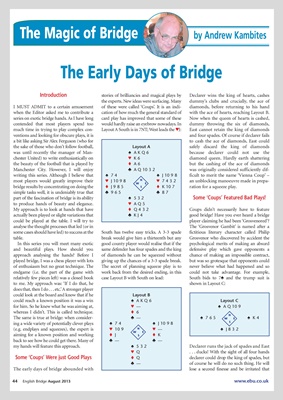 The Magic of Bridge by Andrew Kambites

The Early Days of Bridge

Introduction stories of brilliancies and magical plays by Declarer wins the king of hearts, cashes

the experts. New ideas were surfacing. Many dummy’s clubs and crucially, the ace of

I MUST ADMIT to a certain amusement of these were called ‘Coups’. It is an indi- diamonds, before returning to his hand

when the Editor asked me to contribute a cation of how much the general standard of with the ace of hearts, reaching Layout B.

series on exotic bridge hands. As I have long card play has improved that some of these Now when the queen of hearts is cashed,

contended that most players spend too would hardly raise an eyebrow nowadays. In dummy throwing the six of diamonds,

much time in trying to play complex con- Layout A South is in 7NT; West leads the ™J: East cannot retain the king of diamonds

ventions and looking for obscure plays, it is and four spades. Of course if declarer fails

a bit like asking Sir Alex Ferguson (who for to cash the ace of diamonds, East could

the sake of those who don’t follow football, Layout A safely discard the king of diamonds

Manchester City. However, I will enjoy ® A Q 10 3 2 was originally considered sufficiently dif-

™ 7432 an unblocking manoeuvre made in prepa-

part of the fascination of bridge is its ability ´ 532 Some ‘Coups’ Featured Bad Plays!

to produce hands of beauty and elegance. ™ AQ5

actually been played or slight variations that ® KJ4 good bridge! Have you ever heard a bridge

could be played at the table. I will try to player claiming he had been ‘Grosvenored’?

some cases should have led) to success at the South has twelve easy tricks. A 3-3 spade fictitious literary character called Philip

table. break would give him a thirteenth but any Grosvenor who discovered by accident the

and beautiful plays. How should you same defender has four spades and the king defensive play which gave opponents a

approach analysing the hands? Before I of diamonds he can be squeezed without chance of making an impossible contract,

played bridge, I was a chess player with lots giving up the chances of a 3-3 spade break. but was so grotesque that opponents could

of enthusiasm but no great technique. The The secret of planning squeeze play is to never believe what had happened and so

endgame (i.e. the part of the game with work back from the desired ending, in this could not take advantage. For example,

relatively few pieces left) was a closed book case Layout B with South on lead: South bids to 7´ and the trump suit is

to me. My approach was: ‘If I do that, he shown in Layout C:

whereas I didn’t. This is called technique. t 6

my hands will feature this approach. ´ 532 Declarer runs the jack of spades and East

Some ‘Coups’ Were just Good Plays t Q declarer could drop the king of spades, but

® — of course he will do no such thing. He will