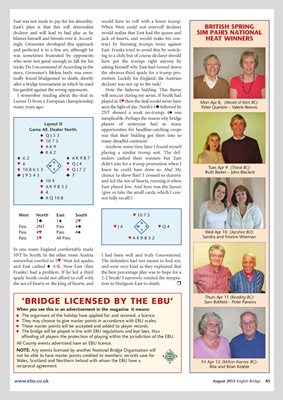 East was not made to pay for his absurdity. would have to ruff with a lower trump.

blames himself and broods over it. Accord- jack of hearts, and would make his con- HEAT WINNERS

and perfected it to a fine art, although he East. Franks tried to avoid this by switch-

was sometimes frustrated by opponents ing to a club, but of course declarer should

tricks. Do I recommend it? According to the asking himself why East had turned down

story, Grosvenor’s lifeless body was even- the obvious third spade for a trump pro-

after a bridge tournament in which he used declarer was not up to the task!

his gambit against the wrong opponents. Note the hideous bidding. This theme

I remember reading about the deal in will reoccur during my series. If South had

Layout D from a European championship played in 4™ then the deal would never have Mon Apr 8, (Weald of Kent BC):

many years ago: seen the light of day. North’s 1® followed by Peter Quinton – Valerie Reeves

inexplicable. Perhaps the reason why bridge

Layout D players of yesteryear had so many

´ QJ53 was that their bidding got them into so

t AK9 Anyhow, some time later I found myself

™ QJ4 didn’t aim for a trump promotion when I

t 4 (give or take the small cards, which I can-

In one room England comfortably made

3NT by South. In the other room Austria I had been well and truly Grosvenored.

somewhat overbid to 5™. West led spades The defenders had not meant to fool me,

and East cashed ´ A-K. Now East (Ben and were very kind as they explained that

Franks) had a problem. If he led a third the best percentage play was to hope for a

spade South could not afford to ruff with 2-2 break! I narrowly resisted the tempta-

the ace of hearts or the king of hearts, and tion to bludgeon East to death. r

• The bridge will be played in line with EBU regulations and bye laws, thus

NOTE: Any events licensed by another National Bridge Organisation will

Wales, Scotland and Northern Ireland with whom the EBU have a Fri Apr 12 (Milton Keynes BC):