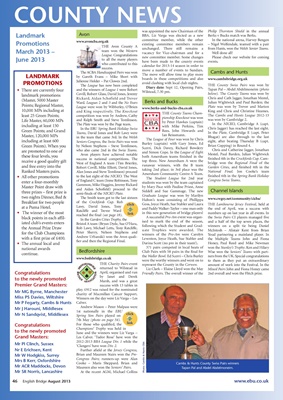 www.avoncba.org.uk committee member, while the other In the national arena, Harvey Bengen

Promotions THE Avon County A

unchanged. There still remains a from Hants, won the Welsh Senior Teams.

vacancy for Vice-chairman and for a Well done all!

who contributed to this

have been made to the county events events.

move a number of events to Sundays.

The ACBA Handicapped Pairs was won

The move will allow time to play more

boards in these competitions and also www.cambsbridge.org.uk

PROMOTIONS The League has now been completed

THE County Swiss Pairs was won by

below). The County Teams was won by

(Master, 5000 Master Ward. Leagues 2 and 3 and the No Fears Berks and Bucks Julian Wightwick and Paul Barden; the

Points; Regional Master, League were won by Wibberley, O’Brien Plate was won by Trevor and Marion

10,000 MPs including at and King respectively. The Knockout King and Chris and Christine Heames.

Life Master, 60,000 MPs and Ralph Smith and Steve Tomlinson. was won by Cambridge 2.

The Plate was won by the Page team. In the NICKO, Cambridge A (capt.

including at least 150 with Mike Perkins, Tim

in the team that came 3rd. In the Welsh Bhagat) are also through to the last

Seniors Congress, the Swiss Pairs was won eight, after beating Thursday B (capt.

Green Points). When you by Nelson Stephens – Steve Tomlinson, Brian Copping) in Round 4.

are promoted to one of who also came 2nd in the Swiss Teams. Chris and Catherine Jagger, Jonathan

and Simon Cope. In the League of Eight

these four levels, you both Amersham teams finished in the

success in national competitions. The

receive a good quality gift top three. New Amersham A were the

West of England A team (Tim Brierley, bridge won the Regional Final of the

and free entry into the runaway winners, with the B team

taking 2nd place; in 3rd place was the

• All other promotions to the last eight of the NICKO. The West

The Student League for 2nd year

enter a four-monthly students was won by the team captained

Master Point draw with and Aidan Schofield) proceed to the

semi-finals of the NICKO Plate.

Graduate League was won by Marilyn

two nights Dinner, Bed & The Smith team got to the last sixteen www.cwgsy.net/community/cicba/

Breakfast for two people of the Crockfords Cup. Rob

and Paddy Walker-Taylor – one man only the end of April, was a success with

• The winner of the most reached the final (see page 18). link

in this new generation of bridge players!

A successful Pro-Am event was organ-

numbers up on last year in all events. In

black points in each affil- In the Garden Cities Trophy, the

iated club’s events enters ised to mark the end of the season, and a half of the top seven places, the

uate Trophies were awarded. The McIntosh – Alistair Kent from Brian

for the Club Champions Peter Sherry, Nelson Stephens and

winners of the Pro-Am were Carolyn Youd partnering a mainland player. In

with a first prize of £400. Andrew Urbanski) won the Avon quali-

fier and then the Regional Final.

• The annual local and Darina Scott (no pro in their team!).

371 pairs competed in local heats of

THE Charity Pairs event represent the County in the Corwen. amount of work into the Festival. In the

Congratulations April, organised and run Friendly Pairs. The overall winner of the 2nd overall and won the Flitch prize.

by Janet and Derek

to the newly promoted Marsh, and was a great

play. £912 was raised for the nominated

1st nationally in the EBU

Congratulations For those who qualified, the link

Champions’ Trophy was held in

to the newly promoted June and the winners were Liz Varga –