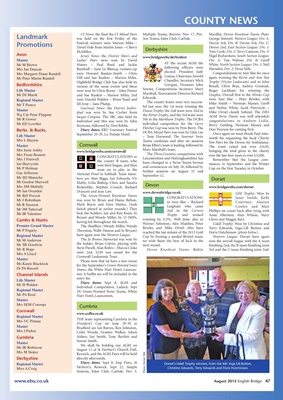 Landmark was held on the first Friday of the Am Teams, Eden Club, Carlisle. George Simnett. Western League: Div. A:

were Howard Basden-Smith – Chris elected: President Judy Congratulations to Ann Slee for once

were Harold Walden – Brian Youd and Edwards. were Ann Slee – Peter Bowles, with

Master Dawes Trophy; the 2nd team were 2nd in Mike Orriel closely behind. The DBA

dual was won by Sue Corbet from

Individual and this was won by John

Fletcher Cup was won by Pym Berry. The Don Pearson for coming first.

– Tony Haywood. The Summer Swiss worth for organising the local Charity

Mrs Fiona Bennett The Three Counties competition with over the last four years to over £5,000.

CONGRATULATIONS to Leicestershire and Nottinghamshire has

Mrs J Fretwell the county B team, who Remember that the League com-

won their league, and then and commences on July 18, followed by

Mr P Holman went on to play in the Cup on the first Tuesday in October.

Mr JM Tattersall Saitch played in earlier rounds.) They 2nd in the Corwen Phillips on count back after tying with

Bryant and Wendy Miller, by 15 IMPs, winning by 0.2%. Well done also to Clews and Maggie Kerr.

Mr SB Goodwin the holder, Brian Colvin, playing with next round. finishing 2nd, the B team finishing joint

Master Please note that we have a new venue

Channel Islands ton. A buffet tea will be included in the

THE team representing Cumbria in the

We shall be holding our AGM on

Keswick, and the AGM Pairs will be held