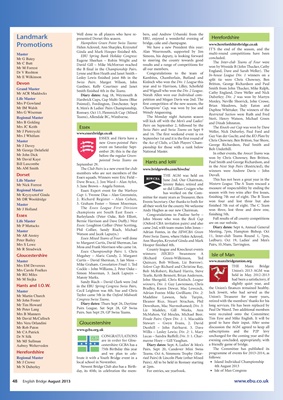 Well done to all players who have re- bers, and Andrew Urbanski from the

Promotions Helen Ackroyd, Ann Sharples, Krzysztof We have a new President this year:

IT’S the end of the season, and the

the B final in the Championship Pairs. all our members. England, Dave and Sarah Weller). The

Grand Master Smith finished 4th in the Teams. and Wignall who won the Div. 2 League.

Daphne Whittaker. The winners of the

Restricted Section were Ruth and Fred

Mrs JC Keith Pairs on September 2, followed by the

The Knock-out Cup was won by Dave

www.essexbridge.co.uk and 16. The first weekend event is on

event on Saturday Sept- pionship for those with a rank below

ember 28; this is the day National Master.

Mr John Dick In other events, the Avocet Teams was

before the regular Green-

Hants and IoW Paul Smith and George Richardson, and

in the Next Step Pairs (Restricted), the

Ms AM Smith The Club Pairs is a new event for club www.bridgewebs.com/hiwcba/ winners were Andrew Davis – John

Dorset members who are not members of the

THE AGM was held on Duvall.

Life Master June 2nd. Our Chairman, This has not been a great year in the

so did Lillian Craigen who measure of respectability by ending the

has worked on the Com- season with two wins after five losses,

mittee for many years as Treasurer, then finishing 7th out of eight. The B Team

Events Secretary. Our thanks to both for

all their work for the county. We welcome

Andy Hughes as our new Chairman.

Life Master Bernie Harrison and Dave Duffy.) West are on our website.

Adrian Fontes, in the HIWCBA Green

Mr M Siejka Manny Marks. had been a satisfactory, if

Master Cecil Leighton was 4th. Sue and Chris Jack Jowett, who had served as the

Mr John Foster Congress Swiss Teams. retired with the members’ thanks for his

Mrs Vera Orlandini Gloucestershire Stewart – Gwyn Evans, 2. David good to have their input. After some

www.gcba.org.uk subscriptions and the P2P levy

Regional Master brate it with a Youth Bridge event in a ried Pairs) & Lincoln Plate (other Mixed follows:

day, its 40th; in celebration the mem- For entries, see yearbook. • Isle of Man Congress