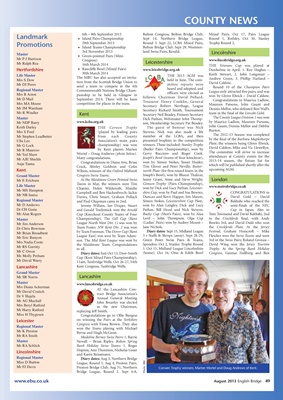 THE Veterans Cup was played at

Mrs S Dow tion from the Scottish Bridge Union to

held in June. The com-

Regional Master heard and adopted, and

Mrs B Aston officers were elected as

pionship to be held in Glasgow in won by Glynn Elwick – David Caldow.

September 2014. There will be keen Congratulations to Maurice Ladlow,

Mr Stephen Leadbetter from each County member of the LCBA, and then The 2012-13 Season was completed

Mr R Maureso The committee will strive to increase

Many congratulations. Joseph’s Bowl (teams of four knockout), attendances at County events for the

Crack, Shirley Goldwin and Colin Tim Glover and Peter Neville. Butter- which will be published shortly after the

Kent Wilson, winners of the Oxford Midweek worth Plate (for first round losers in the upcoming AGM.

Teams in May, the winners were Tim Gimson Trophy (Pairs Championship),

AT the Lancashire Con-

Leicester on winning the Pairs at the Yorkshire

Congress with Fiona Brown. They also