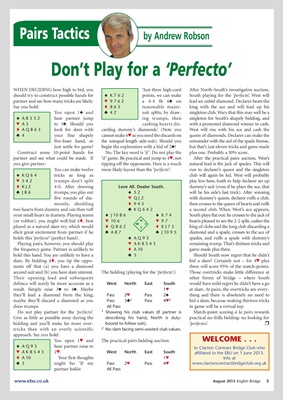 Don’t Play for a ‘Perfecto’

WHEN DECIDING how high to bid, you ‘Just three high-card After North-South’s investigative auction,

should try to construct possible hands for ´ K762 points, we can make South playing for the ‘perfecto’, West will

Say you hold: t 863 reasonable major- king with the ace and will lead up his

You open 1´ and ® 42 suit splits, by draw- singleton club. Wary that this may well be a

´ A8532 hear partner jump ing trumps, then singleton for South’s shapely bidding, and

™ A3 to 3´. Should you cashing hearts dis - with a promoted diamond winner to cash,

t AQ863 look for slam with carding dummy’s diamonds.’ (Note you West will rise with his ace and cash the

® 4 your fine shapely cannot make 6™ as you need the discards on queen of diamonds. Declarer can make the

five-loser hand, or the unequal-length side-suit). Should you remainder with the aid of the spade finesse,

just settle for game? begin the exploration with a bid of 2´? but that’s just eleven tricks and game made

partner and see what could be made. If ‘if ’ game. Be practical and jump to 4™, not After the practical pairs auction, West’s

you give partner: tipping off the opponents. Here is a much natural lead is the jack of spades. This will

You can make twelve more likely layout than the ‘perfecto’: run to declarer’s queen and the singleton

´ KQ64 tricks as long as club will again be led. West will probably

t KJ2 4-0. After drawing Love All. Dealer South. dummy’s suit (even if he plays the ace, that

monds, shedding t 943 then crosses to the queen of hearts and ruffs

two hearts from dummy and can then ruff ® KQ642 a second club. When West’s ace appears,

played as a natural slam try, which would t Q862 S t KJ75 king of clubs and the long club discarding a

holds this ‘perfecto’ (perfect hand). ´ AQ93 spades, and ruffs a spade with dummy’s

Playing pairs, however, you should play ™ AK8543 remaining trump. That’s thirteen tricks and

the frequency game. Partner is unlikely to t A 10 game made plus three.

hold this hand. You are unlikely to have a ® 3 Should South now regret that he didn’t

nents off that (a) you have a diamond three will score 95% of the match-points.

second suit and (b) you have slam interest. The bidding (playing for the ‘perfecto’): Those overtricks make little difference at

Their opening lead and subsequent other forms of bridge – where South

they’ll lead a diamond from the king; Pass 2™ Pass 2´ thing and there is absolutely no need to

maybe they’ll discard a diamond as you Pass 3®1 Pass 4™2 bid a slam, because making thirteen tricks

draw trumps. All Pass in game will be a virtual top.

Do not play partner for the ‘perfecto’. 1 Showing his club values (if partner is Match-point scoring à la pairs rewards

Give as little as possible away during the describing his hand, North is duty- practical no-frills bidding: no looking for

tricks than with an overly scientific 2 No slam facing semi-wasted club values.

You open 1™ and The practical pairs bidding auction: WELCOME . . .