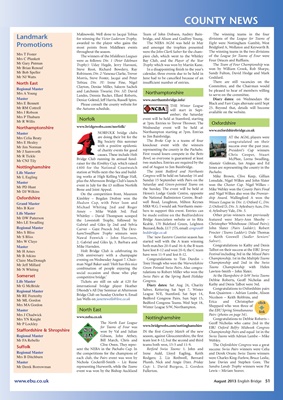 Landmark for winning the Victor Ludorum Trophy, bridge, and Alison and Godfrey Young. divisions of the League for Teams of

awarded to the player who gains the The NEBA AGM was held in May Eight were Nottingham Gambit, West

Promotions most points from Middlesex events and amongst the trophies presented Bridgford A, Wollaton and Keyworth B.

throughout the season. were the John Clark Salver for the cham- The winning teams in the two divisions

Mrs T Foster The winners of the Middlesex Leagues pion club, which went to the Whitley of the League for Teams of Four were

Mrs C Plunkett were as follows: Div. 1 (Peter Edelman Bay Club, and the Player of the Year Four Deuces and Ruffians.

Mr NJ Watts Morris, Steve Foster, Jacqui and Peter June had to be cancelled because of an Goddard.

Clayton, Denise Miller, Saleem Sachek Committee, and the Chairman would

Regional Master be pleased to hear of members willing

Mrs A Young Northamptonshire to serve on the committee.

Mr RM Cottrell the Autumn schedule. 25. Beyond that, details will become

will start in Sept-

Norfolk event will be held at Stamford, starting

at 7pm. Entries to Trevor Thrower. The Oxfordshire

Northamptonshire www.bridgewebs.com/norfolk/ Wednesday event will be held at

Mrs Celia Beaty are doing their bit for the to Jim Bainbridge. AT the AGM, players were

with a positive epidemic knockout event with the winners success over the past year.

of charity events for good representing the county in the Pachabo. President’s Cup winners

causes. These include Holt First round losers compete in the Betts Chris Cooper, Stuart

Bridge Club running its annual fund- Bowl, so everyone is guaranteed at least McPhee, Lorna Swadling,

Mr CNJ Tily two matches. Entries are required by the

raiser for the Kimbley Cup, which raised Alastair Gidman, Ian Angus and Ed

Nottinghamshire £400 for the National Coastwatch end of August to Jim Bainbridge. Jones are representing the county in the

Life Master station at Wells-next-the-Sea and build- The joint Bedford and Northants Pachabo.

plus the Afternoon Bridge Club’s launch Sunday 15 September with Pairs on the Lonsdale, Nigel Wilkes and John Slater

Master Saturday and Green-pointed Teams on

event in July for the £3 million Norfolk won the Chester Cup. Nigel Wilkes –

Mr PD Hunt the Sunday. The event will be held at

On the competition front, Maureen

the Lowestoft Trophy, followed by

Master Mike Harnden. both matches 20-0 and 16-4; the B team Congratulations to Kathy and Denis

Mr H Arnes Holt Bridge Club is celebrating its have lost 8-12 and won 20-0, the C team Talbot on their success at the EBU Jersey

25th anniversary with a champagne have won 11-9 and lost 8-12. Festival including 3rd in the Mixed Pairs

man Nigel Baker said: ‘Holt has this nice Tony Hough who won the Warwickshire Championship and 2nd in the Swiss

Life Master Tickets are still on sale at £20 for Congress. Debbie Roberts, Geoff Nicholas and

Clive Owen. They repre- teams both won, 15-5 and 11-9. The Oxfordshire Congress was a great

Suffolk sent the NEBA in the Pachabo Cup. In Retford Swiss Teams: 1. John and success: Swiss Pairs winners were Celia

Mrs B Ditchburn each club, the Pairs event was won by Rodgers; 2. Liz Rothwell, Bernard were Charles King-Farlow, Bruce Leslie,