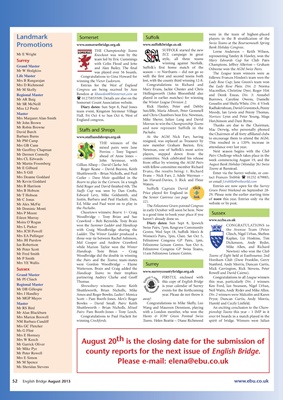 were in the team of highest-placed

Landmark Somerset Suffolk players in the B stratification of the

Swiss Teams at the Bournemouth Spring

Grand Master and Alan Bailey. The final Suffolk’s first home match of the

was played over 56 boards. season – vs Northants – did not go so The League team winners were as

Life Master Congratulations to Gina Howard for well: the first and second teams both follows: Frances Hinden’s team won the

Mrs D Richmond Entries for the West of England Congratulations to Richard and the Lady Rose Plate. Div. 2: Norma

Mr John Brown Morran to win the Championship Teams Thanks are due to the Chairman,

Mr Robin Browne and now represent Suffolk in the

the Chairmen of all forty affiliated clubs

Barbara Burns www.staffsandshrops.org.uk At the AGM Nick Farr, having to encourage them to attend the AGM.

Mr PM Camp resigned, was replaced as Treasurer by This resulted in a 120% increase in

THE winners of the

Mr Geoffrey Chapman Newman, one of Suffolk’s most active Next season begins with the Club

Mr Dermot Connolly players, stepped down from the Pairs Challenge which takes place in the

ahead of Anne Jones –

Mrs S Gill Evans, the results being: 1. Richard Enter via the Surrey website, or con-

Cutler – Dave Moir qualified in the

Bearn to play in the Corwen. In a tough

Mrs B Hobson Staffs Cup was won by Dan Crofts,

the Senior Camrose (see page link of noon this year. Entries only via the

Mr Alex McFie Ed, Mike and Paul went on to play in

in early October will soon be here. Now

is a good time to book your place if you

while Marion Taylor won the Winter Mike Allen, and Richard

Woodbridge did the double in winning Teams of Eight held at Eastbourne; 2nd

Handicap Teams to their trophies www.surreycountybridge.org.uk Rowell and David Cairns).

partnering Audrey Clarke and Geoff FIRSTLY, enclosed with Congratulations to all League winners

Mr Alan Blackburn Pairs: Pam Booth-Jones – Tony Leech. with a London member, who won the pionship Teams this year – 1 IMP in it

Mr Peter Rowell county reports for the next issue of English Bridge.