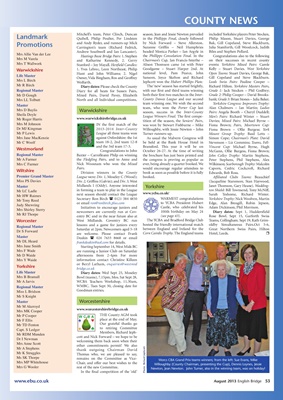 Mrs M Johnson IN the first match of the was won by Stewart Fishburne – Mike Fiona Brown; Pairs, Moortown Cup:

and the 3rd team 17-3. Bransford. This year it will be on Vincent Cup: Michael Byrne, Hugh

Mr A Farmer the Fledgling Pairs, and to Anne and the congress is proving as popular as Peter Stephens, Phil Stephens, Alex

Mrs C Farmer Nick Woosnam who won the Mixed ever, being already a quarter booked. We Wilkinson; Scarborough Trophy: Malcolm

Wiltshire Division winners in the County book as soon as possible before it is fully Edwards, Bob Ross.

Initiatives to encourage juniors and Castle, who celebrated his Adam Dickinson, Phil Morrison.

Mr RJ Thorpe entry BC and in the near future also at (see page 43). Rose Bowl. Sept 15, Garforth Swiss

lessons and a game for juniors every hosted the friendly international match oldby Simultaneous Pairs.Oct 5-6,

Saturday at 2pm. Newcomers aged 5-18 between England and Ireland for the Great Northern Swiss Pairs, Hilton

Mrs F Wade are running a Junior Club on Saturday

Mr F Ellis place at the end of May.

cott and Nick Forward – we hope to be

welcoming them back soon when their

Mr K Struggles Thomas who, we are pleased to say,

In the final competition of the ‘old’