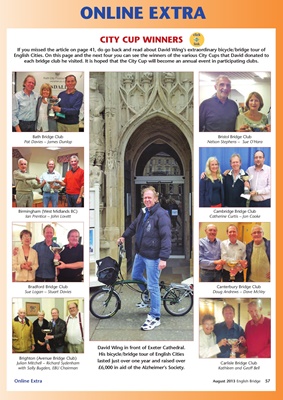 If you missed the article on page 41, do go back and read about David Wing’s extraordinary bicycle/bridge tour of

English Cities. On this page and the next four you can see the winners of the various City Cups that David donated to

each bridge club he visited. It is hoped that the City Cup will become an annual event in participating clubs.

His bicycle/bridge tour of English Cities

with Sally Bugden, EBU Chairman £6,000 in aid of the Alzheimer’s Society. Kathleen and Geoff Bell