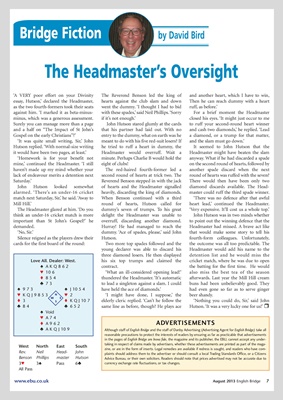 ‘A VERY poor effort on your Divinity The Reverend Benson led the king of and another heart, which I have to win,

essay, Hutson,’ declared the Headmaster, hearts against the club slam and down Then he can reach dummy with a heart

as the two fourth-formers took their seats went the dummy. ‘I thought I had to bid ruff, as before.’

against him. ‘I marked it as beta-minus- with these spades,’ said Neil Phillips. ‘Sorry For a brief moment the Headmaster

minus, which was a generous assessment. if it’s not enough.’ closed his eyes. ‘It might just occur to me

and a half on “The Impact of St John’s that his partner had laid out. With no and cash two diamonds,’ he replied. ‘Lead

Gospel on the early Christians”?’ entry to the dummy, what on earth was he a diamond, or a trump for that matter,

‘It was quite small writing, Sir,’ John meant to do with his five red-suit losers? If and the slam must go down.’

Hutson replied. ‘With normal-size writing he tried to ruff a heart in dummy, the It seemed to John Hutson that the

it would have been two pages, at least.’ Headmaster would overruff. Wait a Headmaster might have beaten the slam

‘Homework is for your benefit not minute. Perhaps Charlie B would hold the anyway. What if he had discarded a spade

mine,’ continued the Headmaster. ‘I still eight of clubs! on the second round of hearts, followed by

Saturday.’ Reverend Benson stepped in with the jack There would then have been only two

alarmed. ‘There’s an under-16 cricket heavily, discarding the king of diamonds. master could ruff the third spade winner.

match next Saturday, Sir,’ he said. ‘Away to When Benson continued with a third ‘There was no defence after that awful

Mill Hill.’ round of hearts, Hutson called for heart lead,’ continued the Headmaster.

The Headmaster glared at him. ‘Do you dummy’s seven of trumps. To his great ‘Very expensive. It’ll cost us a whole top.’

important than St John’s Gospel?’ he overruff, discarding another diamond. to point out the winning defence that the

demanded. Hurray! He had managed to reach the Headmaster had missed. A brave act like

‘No, Sir.’ dummy. ‘Ace of spades, please,’ said John that would make some story to tell his

cards for the first board of the round: Two more top spades followed and the the outcome was all too predictable. The

three diamond losers. He then displayed detention list and he would miss the

Love All. Dealer: West. his six top trumps and claimed the cricket match, where he was due to open

´ AKQ862 contract. the batting for the first time. He would

™ 10 6 ‘What an ill-considered opening lead!’ also miss the best tea of the season

® 73 to lead a singleton against a slam. I could buns had been unbelievably good. They

in the pages of English Bridge are bona fide, the magazine and its publisher, the EBU, cannot accept any under-

taking in respect of claims made by advertisers, whether these advertisements are printed as part of the maga-

zine, or are in the form of inserts. Legal remedies are available if redress is sought, and readers who have com-

Rev. Neil Head- John plaints should address them to the advertiser or should consult a local Trading Standards Office, or a Citizens

Benson Phillips master Hutson Advice Bureau, or their own solicitors. Readers should note that prices advertised may not be accurate due to