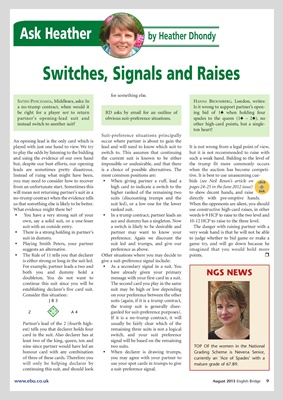 a no-trump contract, when would it Is it wrong to support partner’s open-

partner's opening-lead suit and obvious suit-preference situations. spades to the queen (1´ – 2´), no

instead switch to another suit? other high-card points, but a single-

played with just one hand to view. We try lead and will need to know which suit to It is not wrong from a legal point of view,

to play the odds by listening to the bidding switch to. This assumes that continuing but it is not recommended to raise with

and using the evidence of our own hand the current suit is known to be either such a weak hand. Bidding to the level of

but, despite our best efforts, our opening impossible or undesirable, and that there the trump fit more commonly occurs

leads are sometimes pretty disastrous. is a choice of possible alternatives. The when the auction has become competi-

Instead of ruing what might have been, most common positions are: tive. It is best to use unassuming cue-

you may need to consider how to recover

from an unfortunate start. Sometimes this

· When giving partner a ruff, lead a

high card to indicate a switch to the

will mean not returning partner’s suit in a higher ranked of the remaining two to show decent hands, and raise link

no-trump contract when the evidence tells suits (discounting trumps and the directly with pre-emptive hands.

us that something else is likely to be better. suit led), or a low one for the lower When the opponents are silent, you should

What evidence might there be? ranked suit. use constructive high-card raises, in other

· You have a very strong suit of your

own, say a solid suit, or a one-loser

· In a trump contract, partner leads an

ace and dummy has a singleton. Now

words 6-9 HCP to raise to the two level and

suit with an outside entry. a switch is likely to be desirable and The danger with raising partner with a

· There is a strong holding in partner’s

partner may want to know your

preference. Again we discount the

very weak hand is that he will not be able

to judge whether to bid game or make a

suit led and trumps, and give our

game try, and will go down because he

imag ined that you would hold more

· The Rule of 11 tells you that declarer

is either strong or long in the suit led.

Other situations where you may decide to

give a suit-preference signal include:

For example, partner leads a two and · As a secondary signal in a suit. You

both you and dummy hold a

doubleton. You do not want to

have already given your primary

message with your first card in a suit.

establishing declarer’s five card suit. suit may be high or low depending

Consider this situation: on your preference between the other

J83 suits (again, if it is a trump contract,

the trump suit is generally disre-

A4 garded for suit-preference purposes).

If it is a no-trump contract, it will

card in the suit. Also declarer has at switch, and your suit preference

least two of the king, queen, ten and signal will be based on the remaining

nine since partner would have led an two suits. TOP OF the women in the National

honour card with any combination

of three of these cards. Therefore you

· When declarer is drawing trumps,

you may agree with your partner to

currently an ‘Ace of Spades’ with a

will only be helping declarer by use your spot cards in trumps to give mature grade of 67.89.

continuing this suit, and should look a suit-preference signal.