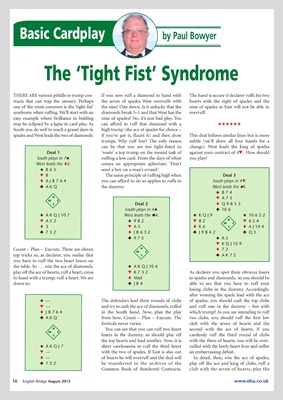 tracts that can trap the unwary. Perhaps the seven of spades West overruffs with hearts with the eight of spades and the

one of the most common is the ‘tight fist’ the nine! One down. Is it unlucky that the nine of spades as East will not be able to

syndrome when ruffing. We’ll start with an diamonds break 5–1 and that West has the overruff.

easy example where brilliance in bidding nine of spades? No, it’s just bad play. You

may be eclipsed by a lapse in card-play. As can afford to ruff that diamond with a HHHHHH

spades and West leads the two of diamonds: if you’ve got it, flaunt it) and then draw This deal follows similar lines but is more

trumps. Why ruff low? The only reason subtle (we’ll show all four hands for a

can be that you are too tight-fisted to change). West leads the king of spades

Deal 1 ‘waste’ a top trump on the menial task of against your contract of 4™. How should

South plays in 7´. ruffing a low card. From the days of whist you play?

™ 8 The same principle of ruffing high when Deal 3

top tricks so, as declarer, you realise that S ® AK75

you have to ruff the two heart losers on

play off the ace of hearts, ruff a heart, cross ™ K732 As declarer you spot three obvious losers

to hand with a trump, ruff a heart. We are t Void in spades and diamonds, so you should be

losing clubs in the dummy. Accordingly,

after winning the spade lead with the ace

´ — The defenders lead three rounds of clubs of spades, you should cash the top clubs

™ — and try to cash the ace of diamonds, ruffed and ruff one in the dummy – but with

t J8764 in the South hand. Now, plan the play which trump? As you are intending to ruff

® AKQ from here. Count – Plan – Execute. The two clubs, you should ruff the first low

formula never varies. club with the seven of hearts and the

N You can see that you can ruff two heart second with the ace of hearts. If you

S losers in the dummy, so should play off carelessly ruff the third round of clubs

the top hearts and lead another. Now, it is with the three of hearts, you will be over-

™ — with the two of spades. If East is also out an embarrassing defeat.

t — of hearts he will overruff and the deal will In detail, then, win the ace of spades,

® 732 be transferred to the archives of the play off the ace and king of clubs, ruff a

Guinness Book of Butchered Contracts. club with the seven of hearts, play the