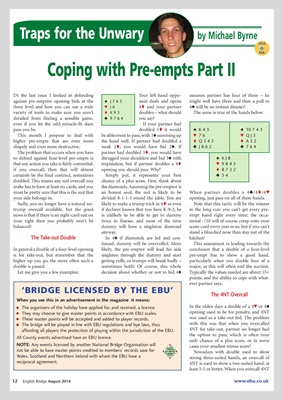 IN the last issue I looked at defending

against pre-emptive opening bids at the

three level and how you can use a wide

variety of tools to make sure you aren't

derailed from finding a sensible game,

even if you let the odd miracle-fit slam

This month I propose to deal with

higher pre-empts that are even more

shapely and even more destructive.

The problem that occurs when you have

to defend against four-level pre-empts is

that any action you take is fairly committal:

if you overcall, then that will almost

certainly be the final contract, sometimes

doubled. This means any suit overcall you

make has to have at least six cards, and you

must be pretty sure that this is the suit that

your side belongs in.

Sadly, you no longer have a natural notrump

overcall available, but the good

news is that if there is an eight-card suit on

your right then you probably won't be

In general a double of a four-level open ing

is for take-out, but remember that the

higher up you go, the more often such a

Let me give you a few examples:

4t and your partner

If your partner had

doubled 1t it would

be abhorrent to pass, with 1´ summing up

the hand well. If partner had doubled a

partner had doubled 3t, you would have

shrugged your shoulders and bid 3´ with

trepidation, but if partner doubles a 4t

opening you should pass. Why?

Simply put, it represents your best

chance of a plus score. First, think about

an honest soul, the suit is likely to be

likely to make a trump trick in 4t as even

if declarer knows that you have K-9-3, he

is unlikely to be able to get to dummy

twice to finesse, and most of the time

dummy will have a singleton diamond

In 4´ if diamonds are led and con tinued,

dummy will be overruffed. More

likely, the pre-emptor will lead his side

singleton through the dummy and start

getting ruffs, or trumps will break badly -

sometimes both! Of course, this whole

decision about whether or not to bid 4´

Traps for the Unwary

• The bridge will be played in line with EBU regulations and bye laws, thus

NOTE: Any events licensed by another National Bridge Organisation will

Wales, Scotland and Northern Ireland with whom the EBU have a

assumes partner has four of them - he

might well have three and then a pull to

4´ will be an instant disaster!

The same is true of the hands below:

opening, just pass on all of these hands.

Note that this tactic will be the winner

in the long run: you can't get every preempt

-710 will of course creep onto your

score-card every year or so, but if you can't

stand a bloodied nose then stay out of the

This assessment is leading towards the

conclusion that a double of a four-level

pre-empt has to show a good hand,

particularly when you double four of a

major, as this will often end the auction.

Typically the values needed are about 15+

points, and the ability to cope with what ever

opening used to be for penalty, and 4NT

was used as a take-out bid. The problem

with this was that when you overcalled

4NT for take-out, partner no longer had

the option to pass, which is often your

only chance of a plus score, or in some

cases your smallest minus score!

Nowadays with double used to show

strong three-suited hands, an overcall of

4NT is used to show a two-suited hand, at

least 5-5 or better. When you overcall 4NT