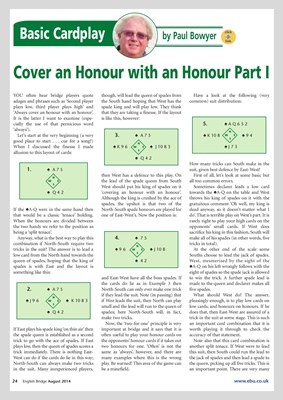 Bridge books, other card games and

card combinations in bridge where best

play is to wait for the opponents to lead

Let's return to the card combination of

Example 5. Is there any way South can

make five tricks? Not on the actual

distribution that has been given, but is

there a layout of the East-West cards

where five tricks can be made?

Did someone say: 'What if East or West

has the singleton king of spades?'. No, that

South can cash the ace of spades (drop ping

the king), then the jack and then the

queen but the ten would still be the boss

The answer is that West must hold

precisely two spades including the king.

Not likely but possible. You have to hope

South can lead a low card to the queen of

come back to the jack and (assuming that

he can get to dummy) has the two boss

spades in the North hand.

All of the above examples are by way of

an introduction to the highly complicated

topic of suit combinations, which is an

area of card-play that needs concentration

and attention, and will be treated in future

issues of this magazine. r

players to sample the atmosphere of the Brighton Summer Meeting.

run from Monday to Wednesday. 'Next Step' sessions are held from Tuesday to

try out an EBU congress event.

Tuesday 10.00am Lesson (topic to be arranged)

Thursday 10.00am Lesson (topic to be arranged)

Entry fee for either event: £46 which includes the bridge sessions and the

lessons. First Step players wishing to stay on for Thursday can do so for an

Blue points will be awarded to the top 1/4 of the field in all events.

There is still time to enter!

THE 2013-14 Hubert Phillips Bowl has been won by the team of Sally Brock, Gunnar

The event is a mixed pivot teams, using aggregate scoring, and the Brock team

won by 180 points after sixty boards - a very narrow margin after such a long match.

In fact the final was close throughout, with the opponents, the team of Tom

with ten boards to play.

The Hubert Phillips Plate was won by the team of Sarah Dunn, Nick Boss, David