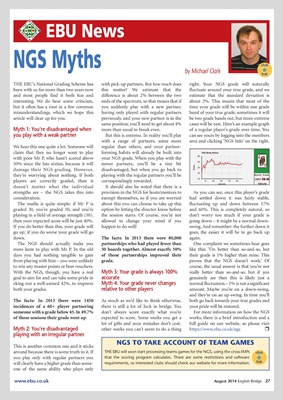 THE Laws and Ethics Committee have agreed some minor

changes to the Blue and White Books to take effect on August 1st.

After the first year in their new formats there are, thankfully, very

few changes to either publication.

In the Blue Book there are NO CHANGES TO PERMITTED

and section 8 (Other permissions).

There are some changes to detail to make things clearer. In

particular we have changed a few words in 7C1(iv):

7 C 1 (iv). Any combination of meanings that show either or

1) At least five cards in a suit, specified or not,

which must not be the suit opened, and/or

which may be specified or not, but both of

which must not be the suit opened.

(Words in bold indicate the changes)

together with updated versions of both books for down loading.

There will not be a reprint of the Blue Book this

In the White Book the changes are mostly to clarify existing

regulations/advice and to correct some typos. However, we have

made a change to one of the correction periods detailed in #2.5.1

and #2.5.4. This concept of 'Gross and Manifest scoring errors'

(which no one really understood) has been replaced by:

Later scoring errors: This is the period referred to in Law 79C2

within which certain scoring errors can be corrected. No request

expired under any circumstances. The only errors which will be

corrected in this period are errors introduced by the officials, and

errors which have an impact on multiple scores (such as players

sitting in the wrong direction in a Swiss match). This does not

cover errors such as entering a wrong score, which should have

been found by checking at the time.

The International Laws of Contract Bridge

Members may be interested to know that the Portland Club, which

the 1993 ones. The new laws took effect on April 1st and are

green book. These apply to rubber bridge ONLY. The Laws of

Duplicate Bridge 2007 (red book) remain in force for ALL

Changes to the Blue

and David Kenward) who successfully defended the Garden Cities

Trophy, and claimed a fifth win in the last ten editions of this event

THE EBU is pleased to announce the introduction of a new

competition, the Player of the Year Championship.

the most prestigious events on the EBU calendar. The player

accumulating the most place points in the year (1st October to

The events for which points are available include knockout com pe

titions and congress tournaments, and the first event will be the

Two Stars Pairs at the Autumn Congress in October (see below).

While this competition will appeal to those battling for the top

prize, we also hope that it will prompt some friendly rivalries

that the prize money will be covered by an increase in entries.

Series, and the points that can be scored in each, will be

THE Autumn Congress will be held in Peterborough on 17th to

19th October (see page 18). This will not only be the first congress

which will award points in the new Player of the Year Champion ship,

but is also the 70th year of the congress. The main event, the

Two Stars Pairs, has been won by some of the greats of the English

To mark the anniversary, the new venue, and the start of the

Player of the Year Championship, the Two Stars Pairs will follow a

new format. The qualifier on Friday is a 12 x 4-board Swiss Pairs,

scored by match-points (not VPs). The top 20 pairs qualify for the

Two Stars Pairs, the next 20 for the Satellite pairs. Those who don't

Pairs on Saturday, with 9 x 6-board rounds scored by VPs. So two

offer, plus the main finals for those who qualify. We also have our

Join us for this anniversary event in Peterborough, try to add

your name to the illustrious list of winners, and also use the free

time in the schedule to visit some of the local attractions, such as