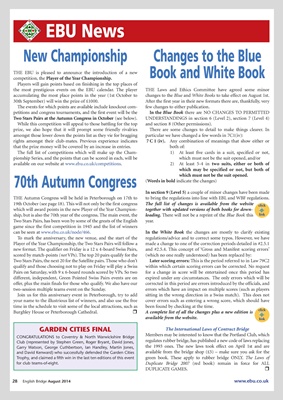 THE last time that I played in a Sim was a few years ago. Partner

and I scored well, and finished second nationwide. This was

perhaps more of an achievement than it sounds. Partner had a bit

too much to drink: when I sent him an e-mail the next morning

congratulating him on his performance, not only did he not

remember how he got home, he didn't even remember that he'd

been playing bridge the previous evening. Still, it hasn't blighted

his international career. Hasn't done mine any favours, mind . . .

inconsistency and fairness. Why did I win my club heat with 56%

and yet score only 48% nationwide? Why do the cards always

favour North-South? It's a swindle!

And yes, it can certainly look that way. It isn't, of course - we'd

hardly run competitions which were open to such opprobrium,

but perhaps it's the right moment to explain why things

sometimes look a bit peculiar, and then I'll move on to suggest a

couple of 'Best Practices' which will, if followed, in the long run

reduce the appearance of inconsistency and bias.

There's an explanation on the EBU web site, at http://www.

which explains the scoring differences. It's even got tables and a

worked example! But the long and the short of it is that when you

play a Sim, you're actually playing in two events at once, and your

scores are undergoing not one, but two sets of comparisons. Making

and timorous players in the local game (especially the pair who

finesse, then anyone across the whole field who bid a slam will be

making it, the same way that you made twelve tricks. What's more,

there's no upside for you: nobody who bids the slam is going to go

above you. And to really lay it on thick, don't forget that more and

more people are going to tie your magnificent 680. This is either too

depressing for words or, more probably, what actually makes playing

in Sims a bit more challenging than you'd thought.

To do well, you have to outsmart not only everybody at the club,

you've got to match or better everyone across the country. So, if

achievement. Unlike, of course, my partner from the first

paragraph, who, by the time we'd finished playing, wasn't feeling

Now, on to 'best practices'. The last thing that I'm going to do is start

telling clubs how to run their own events, including Sims heats.

there's an answer to the most common complaint: 'The cards

always favour the same direction.' (They don't, as the hands are a

complete set of computer-dealt hands not a manufactured set.)

off the Howell cards! Eliminate perceived bias at one fell swoop!

The other obvious step is to draw for position. A lot of clubs have

members who have 'favourite chairs' or 'always sit North-South'.

How about, just on Sims nights, forgetting that? It's a National

Competition, after all, so why should club-exclusive preferences

hold sway (obviously this doesn't apply to people who have genuine

reasons for being stationary)? I don't think I'm being particularly

entitled to request that members break their habits. It would make

all the difference. So, there's the answer. If you think your club

would benefit from this, tell them - I'm sure they'll listen, and the

end result will be a much more satisfactory evening for all.

Finally, don't forget that we have a new prize structure, as well, which

will benefit both players and clubs. Details can be found here:

http://www.ebu.co.uk/sims-prizes. If you have not played in a Sim

Pairs before, you might discover that if the event is nicely run and

everybody enters into the spirit of things (remember: you're playing

in two competitions at the same time) it can all be rather jolly. r

teams and supports all teams (Open, Women, Seniors and Juniors)

(No event on Mon 6th, due to the Bank Holiday)