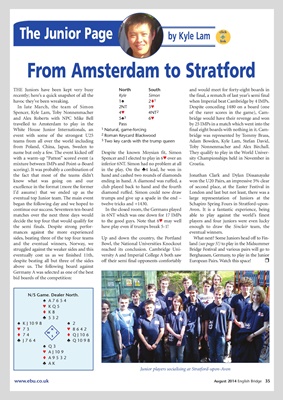 At the age of 8, I had a recurrent hip

problem, was put in plaster for three months

and was sent to a children's sanatorium in

Switzerland. My mother went with me and

ago. I was then moved to another sana torium

for twenty months, without bridge.

When I returned home, I had very limited

physical activities but my aunt, my two older

cousins and my grandmother all played

bridge, and I joined them. I also remember

playing at a bridge club in Austria and they

were surprised by a prepubescent's ability

It must be running in my family, as a

cousin of my mother's played in the same

team as Rixi Markus, when the Austrian

These days, unless I am playing in a

duplicate, I play rubber bridge every

we play goulashes at £30, it is quite a tough

Do you always play with the same partners

In serious duplicate, I mostly play with

Victor Silverstone (addressed by me as 'Sir

William') and my former wife, Kitty, with

whom I am on my best behaviour, without a

The highlight of the year is of course when

Anthony, Prince of Quedgeley', where the

Priday family originates from) comes from

Marbella to play with me in the two events I

have sponsored, the Lederer and the Senior

All these partners are excellent players and

for my bridge system I am vastly indebted to

Sir William - it's a system originally based

BERNARD TELTSCHERcame to the UK in 1938, and gained degrees from

1946 he was instrumental in restarting the Cambridge Bridge Club that

had been dormant during the war. He became its President and played in

the first post-war Oxford match. Bernard has played bridge for more than

eighty years and has won most major national compe titions. He is

Pre sident of the London Metropolitan Bridge Association and has

spon sored, as well as won, the prestigious Lederer and Teltscher trophies.

As far as I am concerned, he never, and I

is flawless and occasionally a look

of surprise comes to his face but, like Sir

Victor, he always tries to take the blame if

I have been in business for almost 68 years. I

sold the trading company in 1991 to Martini

& Rossi, stayed for another five years as nonexecutive,

Brothers but kept the buildings in the Isle of

Dogs and used them as a business centre.

warlike Paintball Centre and a multi-sports

centre, but our offices were just used as

I sold the buildings in 2006 but kept the

two property companies which own a few

factories which we let, and all I do now is

look after those, so I do not work too hard.

I still go to my Marble Arch office four

now we have one.

card combinations and how to play, and

which I read every day on the tube when I

Terence Reese's books; they are fantastic. I

actually played with Terence in one long

duplicate in Abu Dhabi and that was the

only time when any partner of mine fell

asleep while I was playing a hand!

tennis and backgammon. Now at table

tennis I am just as likely to put the ball under

as over the table! And backgammon is fading

fast. I watch TV and go out and entertain at

dinner quite a lot.

I am saddened that rubber bridge is fast

disappearing. I think it is caused by the fact

that young people don't seem to be playing

cards when there are too many alternatives.

My main complaint, though, is a com plaint

all bridge play ers make when they

have been playing for a long time. There

seems to be absolutely no limit to con ventions

which are not even published and

have to be explained on the spot. I have no

quarrel with transfers over one club and over

opponents' doubles but when various bids

have no obvious meanings and there fore no

When it comes to pairs, time prevents any

long discussions and I think there should be

quite strict limitations on the systems used

In any case, I fear that making bidding at

bridge so convoluted means that it is

becoming much less popular than it could

have been. This also means that it is less

bidding in the Vu-graph and on the

What is the bridge success closest to your

My most pleasing result was playing with

Terence Reese in Abu Dhabi (see above); in

the teams we beat Garozzo and Belladonna,

Flint and Sheehan to come third. I cannot

quite remember but we were about fifth in

the pairs. The pairs event was won as

expected by Garozzo and Belladonna. That

was before it was customary to pay bridge

partners and all I did was to send Terence

One of my worst 'achievements' was when,

years ago, I played in successive Camrose

trials, once with Irving Rose and once with

Jeremy Flint, and failed to qualify in both.

Brighton with Irving Rose (named by me

'the Great Rose'), but beating Garozzo and

Belladonna must rank amongst my big

I also enjoyed the creation of the Senior

Camrose Trophy. While there was a Ladies

events for youngsters, the Junior Camrose

and the Peggy Bayer, it amazingly took some

eight years to finally come up with the

Seniors equivalent, which I sponsored for six

years, won twice and was second in twice as

well. It is now a permanent feature in the UK