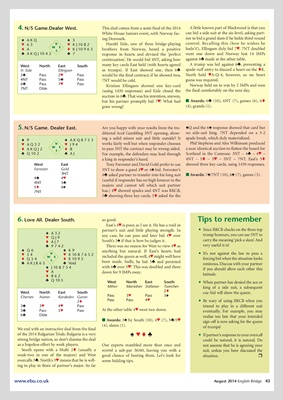 THE St. Albans Duplicate Bridge Club was founded at the Peahen

The club transferred to St. Michael's Church Hall, and then

moved to the Jersey Farm Community Centre in May 1989.

Thus, in May 2014, the 25th anniversary of this move coincided

with the 50th of the Club's foundation. To celebrate both these

anniversaries, an annual competition was inaugurated called the

origins) and for which Tom Dennis, manager of the Peahen Hotel,

attracted seventy players from across the county. The first winners

were Tugrul Kaban and Tom Dessain (photo below).

The club meets for duplicate bridge every Monday evening at

the Jersey Farm Community Centre in St Albans. There is ample

parking, and free coffee and biscuits. Visitors and new members

Further information can be found on the club's web site:

Tugrul Kaban and Tom Dessain with the Peahen Trophy

CHRISTCHURCH Bridge Club in Dorset has always had a strong

membership of over one hundred and fifty. However, it became

obvious to the committee that the membership was aging and we

were losing more members through natural causes than we were

In September 2012, the committee decided to start bridge

lessons for beginners and improvers - the purpose being to

and we have increased the club membership to over two hundred.

The beginners and improvers classes attract about thirty-five

new students every year. We run the classes for two thirteen-week

We also run a 'no-fear' duplicate every Thursday evening

throughout the year, which regularly attracts six or seven tables.

have finished the courses to play duplicate bridge, before taking

on the rigours of regular club sessions.

We also run a weekly Friday morning workshop that is

dedicated to 'play and defence'.

of the committee members and general members who either

the Friday morning sessions. Membership is up, the club has a

much wider appeal, and there is a new enthusiasm at Christ church

Two of the recent graduates of the school, Christine Denning

vibrancy into their club and its activities. (David Berwitz)

proudly holding up their 'graduation' certificates

Closing date for this year's competition:

(half-price pro-rata for players under 25)

The entry fee includes the fee for the