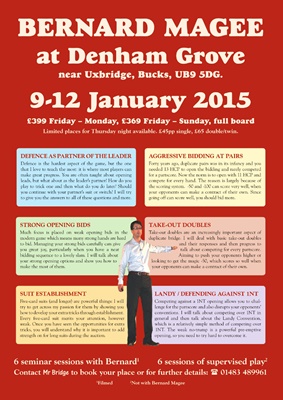 The Rule of Seven

work out how many times to duck an ace in a no-trump contract.

number your dummy holds and deduct the total from seven; this

is the number of times you (as declarer) should hold up. So with

When does it apply?

you hold only one stopper, and it only works when they have led

from a five-card suit.

dummy and A-4-2 in your hand, with the nine forcing an honour

from the defender on your right after a low card has been led.

How does it work?

If you have five cards between your hand and dummy's, the

opponents have eight between them. If they are split 5-3, you can cut

communication by holding up twice. Effectively for every card fewer

than seven that you have between your hand and dummy's, you have

the suit at a later stage in the play of the hand. He won't be able to

return the suit if he no longer holds any cards in it!

What are the problems?

is led from K-Q-J-10, you want to duck twice to avoid losing three

tricks, but the rule of seven says to win on the second round! It is

one level (which is usually based on a five-card suit), as that gets

the most out of it.

Again, note: you can only use the Rule of Seven when you are

declarer - it doesn't apply when you are a defender.

What more do I need to know?

This may seem overly obvious, but remember that the purpose of

ducking is to cut communications between the defenders' hands,

and to exhaust one opponent of his holding in a suit.

pre-empted), then you don't need to hold up, but the Rule of

club based in the UK but while most members are British, there

are enough members across the world to guarantee you a game

any time of day or night. While match-pointed pairs is the most

popular format, there are 18-board IMP pairs tournaments held

most UK evenings and these take just under two hours - much

faster than at face-to-face bridge.

tournament. I was North and partner showed a balanced 24-25

HCP; I bid 3® as Puppet Stayman, which was doubled by East

before partner denied four cards in either major. With a known

combined HCP count of 32-33 and with missing honours surely

in the club suit, I bid what I considered the safer slam of 6´. It

making it, despite having twelve tricks off the top!

6NT is where we should have been. Let's say you are South and

get the lead of a club to East's queen. How would you play to make

Because this was IMP scoring, making the contract is the allimportant

will go one off in 6NT, shrug your shoulders and move on to the

next board. But not at IMPs!

The splits are, of course, dastardly - without them there would be no

problem. As you don't know how the red suits will be divided, a

practical squeeze solution is to rectify the count immediately by

ducking the first club trick and winning the switch - say, a heart.

Now you cash your remaining hearts in hand and the ®A, throwing

a diamond from dummy, and also cash the ´Q just to check that

they are no worse than 5-1. On the actual layout, you have now

squeezed West, who has had to throw a spade solving your blockage

problem, or a diamond to set up your t9. If West had started with

five spades and four hearts, you can squeeze him in those suits by

playing out diamonds as he has to discard before dummy.

If all six outstanding spades were in the West hand, it seems that

a red-suit squeeze against East would be the best line at this point.

Either red suit can be 3-3 and we are still there. r