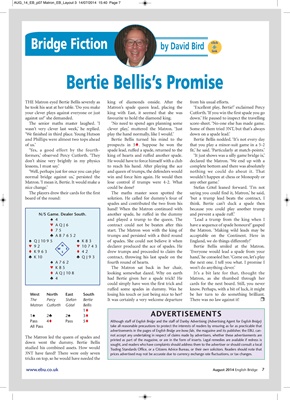 king of diamonds onside. After the

king with East, it seemed that she was

favourite to hold the diamond king.

'No need to spend ages planning some

Bertie Bellis turned his mind to the

prospects in 5t. Suppose he won the

spade lead, ruffed a spade, returned to the

king of hearts and ruffed another spade.

He would have to force himself with a club

to reach his hand. After playing the ace

and queen of trumps, the defenders would

win and force him again. He would then

lose control if trumps were 4-2. What

The maths master soon spotted the

solution. He called for dummy's four of

spades and contributed the two from his

hand! When the Matron continued with

another spade, he ruffed in the dummy

and played a trump to the queen. The

contract could not be beaten after this

start. The Matron won with the king of

trumps and persisted with a third round

of spades. She could not believe it when

declarer produced the ace of spades. He

drew trumps and proceeded to claim the

contract, throwing his last spade on the

fourth round of hearts.

The Matron sat back in her chair,

looking somewhat dazed. Why on earth

had Bertie given her a spade trick? He

could simply have won the first trick and

ruffed some spades in dummy. Was he

losing his touch or just being nice to her?

It was certainly a very welcome departure

from his usual efforts.

Cutforth. 'If you win the first spade you go

down.' He paused to inspect the travelling

score-sheet. 'No-one else has made game.

Some of them tried 3NT, but that's always

down on a spade lead.'

Bertie Bellis nodded. 'It's not every day

that you play a minor-suit game in a 5-2

fit,' he said. 'Particularly at match-points.'

'It just shows was a silly game bridge is,'

declared the Matron. 'We end up with a

complete bottom and there was absolutely

nothing we could do about it. That

wouldn't happen at chess or Monopoly or

saying you could find it, Matron,' he said,

'but a trump lead beats the contract, I

because you could play another trump

and prevent a spade ruff.'

'Lead a trump from the king when I

have a sequence of spade honours?' gasped

the Matron. 'Making wild leads may be

acceptable on the Continent. Here in

England, we do things differently!'

Bertie Bellis smiled at the Matron.

'Everyone would lead a spade from your

hand,' he consoled her. 'Come on, let's play

the next one. I tell you what. I promise I

won't do anything clever.'

It's a bit late for that, thought the

Matron, as she thumbed through her

cards for the next board. Still, you never

know. Perhaps, with a bit of luck, it might

be her turn to do something brilliant.

There was no law against it! r

advertisements in the pages of English Bridge are bona fide, the magazine and its publisher, the EBU, cannot

accept any undertaking in respect of claims made by advertisers, whether these advertisements are

printed as part of the magazine, or are in the form of inserts. Legal remedies are available if redress is

sought, and readers who have complaints should address them to the advertiser or should consult a local

Trading Standards Office, or a Citizens Advice Bureau, or their own solicitors. Readers should note that

he took his seat at her table. 'Do you make

your clever plays against everyone or just

against us?' she demanded.

The senior maths master laughed. 'I

and Phillips were almost two tops ahead

'Yes, a good effort by the fourthformers,'

lessons, I must say.'

'Well, perhaps just for once you can play

normal bridge against us,' persisted the

Matron. 'I mean it, Bertie. It would make a

The players drew their cards for the first

board of the round:

The Matron led the queen of spades and

down went the dummy. Bertie Bellis

studied his combined assets. How would

3NT have fared? There were only seven

tricks on top, so he would have needed the