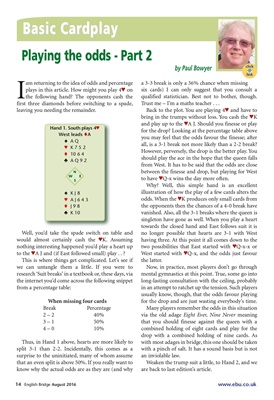 am returning to the idea of odds and percentage

plays in this article. How might you play 4™ on

the following hand? The opponents cash the

first three diamonds before switching to a spade,

leaving you needing the remainder.

Well, you'd take the spade switch on table and

nothing interesting happened you'd play a heart up

This is where things get complicated. Let's see if

we can untangle them a little. If you were to

research 'Suit breaks' in a textbook or, these days, via

the internet you'd come across the following snippet

from a percentage table:

Thus, in Hand 1 above, hearts are more likely to

surprise to the uninitiated, many of whom assume

that an even split is above 50%. If you really want to

know why the actual odds are as they are (and why

six cards) I can only suggest that you consult a

qualified statistician. Best not to bother, though.

Back to the plot. You are playing 4™ and have to

bring in the trumps without loss. You cash the ™K

and play up to the ™A J. Should you finesse or play

for the drop? Looking at the percentage table above

you may feel that the odds favour the finesse; after

However, perversely, the drop is the better play. You

should play the ace in the hope that the queen falls

from West. It has to be said that the odds are close

between the finesse and drop, but playing for West

to have ™Q-x wins the day more often.

Why? Well, this simple hand is an excellent

illustration of how the play of a few cards alters the

odds. When the ™K produces only small cards from

the opponents then the chances of a 4-0 break have

vanished. Also, all the 3-1 breaks where the queen is

singleton have gone as well. When you play a heart

towards the closed hand and East follows suit it is

no longer possible that hearts are 3-1 with West

having three. At this point it all comes down to the

two possibilities that East started with ™Q-x-x or

West started with ™Q-x, and the odds just favour

Now, in practice, most players don't go through

mental gymnastics at this point. True, some go into

long-lasting consultation with the ceiling, probably

in an attempt to ratchet up the tension. Such players

usually know, though, that the odds favour playing

for the drop and are just wasting everybody's time.

Many players remember the odds in this situation

via the old adage Eight Ever, Nine Never meaning

that you should finesse against the queen with a

combined holding of eight cards and play for the

drop with a combined holding of nine cards. As

with most adages in bridge, this one should be taken

with a pinch of salt. It has a sound basis but is not

Weaken the trump suit a little, to Hand 2, and we

are back to last edition's article.