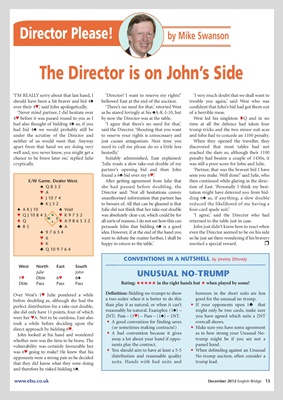 The Director is on John’s Side

‘I’M REALLY sorry about that last hand, I ‘Director! I want to reserve my rights!’ ‘I very much doubt that we shall want to

should have been a bit braver and bid 4´ bellowed East at the end of the auction. trouble you again,’ said West who was

over their 4™,’ said John apologetically. ‘There’s no need for that,’ retorted West confident that John’s bid had got them out

‘Never mind partner, I did hesitate over as he stared lovingly at his ´A-K-J-10, but of a horrible mess.

4™ before it was passed round to you as I by now the Director was at the table. West led his singleton tQ and in no

had also thought of bidding 4´ so, if you ‘I agree that there’s no need for that,’ time at all the defence had taken four

had bid 4´ we would probably still be said the Director. ‘Shouting that you want trump tricks and the two minor suit aces

under the scrutiny of the Director and to reserve your rights is unnecessary and and John had to concede an 1100 penalty.

neither of us would want that. Anyway just causes antagonism. Next time you When they opened the traveller, they

well and, you never know, you might get a heatedly.’ reached the slam so, although their 1100

chance to be brave later on,’ replied Julie Suitably admonished, East explained: penalty had beaten a couple of 1430s, it

cryptically. ‘Julie made a slow take-out double of my was still a poor score for John and Julie.

partner’s opening bid and then John ‘Partner, that was the bravest bid I have

E/W Game. Dealer West. After getting agreement from Julie that then continued while glaring in the direc-

´ Q832 she had paused before doubling. the tion of East. ‘Personally I think my hesi-

™ A Director said: ‘Not all hesitations convey tation might have deterred you from bid-

t J 10 7 4 unauthorised information that partner has ding 6´ as, if anything, a slow double

® KJ32 to beware of. All that can be gleaned is that reduced the likelihood of me having a

´ A K J 10 ´ Void Julie did not think that her take-out double four-card spade suit.’

´ 97654 idea. However, if at the end of the hand you even the Director seemed to be on his side

™ 6 want to debate the matter further, I shall be so he just sat there wondering if his bravery

t K happy to return to the table.’ merited a special reward. r

CONVENTIONS IN A NUTSHELL by Jeremy Dhondy

Dble Pass Pass Pass Rating: HHHHH in the right hands but H when played by some!

Over West’s 1™ Julie pondered a while Definition: Bidding no-trumps to show honours in the short suits are less

before doubling as, although she had the a two-suiter when it is better to do this good for the unusual no trump.

perfect distribution for a take-out double, than play it as natural, or when it can’t • If your opponents open 1® that

she did only have 11 points, four of which reasonably be natural. Examples: (1´) – might only be two cards, make sure

took a while before deciding upon the • A good convention for finding saves overcall shows.

direct approach by bidding 6™. (or sometimes making contracts!) • Make sure you have some agreement

whether now was the time to be brave. The away a lot about your hand if oppo- trump might be if you are not a

was 6™ going to make? He knew that his • You should aim to have at least a 5-5 • When defending against an Unusual

opponents were a strong pair so he decided distribution and reasonable quality No-trump auction, often consider a

that they did know what they were doing suits. Hands with bad suits and trump lead.

and therefore he risked bidding 6´.