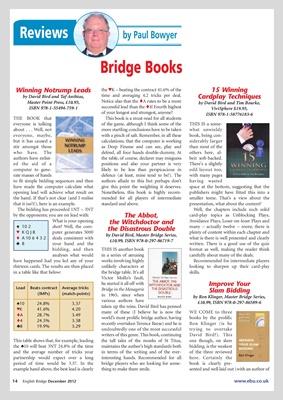 Winning Notrump Leads the ™K – beating the contract 41.6% of the 15 Winning

Master Point Press, £10.95, Notice also that the tA rates to be a more by David Bird and Tim Bourke,

everyone is talking of the game, although I think some of the THIS IS a some-

about . . . Well, not more startling conclusions have to be taken what unwieldy

everyone, maybe, with a pinch of salt. Remember, in all these book, being con-

but it has caused a calculations, that the computer is working si derably larger

stir amongst those as Deep Finesse and can see, play and than most of the

who have. The defend, all four hands double-dummy. At others here, al-

authors have enlist- the table, of course, declarer may misguess beit soft-backed.

computer to gene- likely to be less than perspicacious in odd layout too,

rate masses of hands defence (at least, mine tend to be!). The with many pages

have made the computer calculate what give this point the weighting it deserves. space at the bottom, suggesting that the

opening lead will achieve what result on Nonetheless, this book is highly recom- publishers might have fitted this into a

the hand. If that’s not clear (and I realise mended for all players of intermediate smaller tome. That’s a view about the

that it isn’t!), here is an example. standard and above. presentation, what about the content?

The bidding has proceeded 1NT – 3NT Well, the chapters include such solid

by the opponents; you are on lead with: The Abbot, card-play topics as Unblocking Plays,

What is your opening the Witchdoctor and Avoidance Plays, Loser-on-loser Plays and

the Disastrous Double plenty of content within each chapter and

® 8 your hand and the written. There is a good use of the quiz

bidding, and then THIS IS another book format as well, making the reader think

analyses what would in a series of amusing carefully about many of the deals.

thirteen cards. The results are then placed unlikely characters at looking to sharpen up their card-play

in a table like that below: the bridge table. It’s all skills.

he started it all off with Improve Your

in 1965, since when by Ron Klinger, Master Bridge Series,

taken up the reins. David Bird has penned

world’s most prolific bridge author, having books by the prolific

recently overtaken Terence Reese) and he is Ron Klinger (is he

undoubtedly one of the most successful trying to overtake

writers of this genre. This book, continuing David Bird?). This

This table shows that, for example, leading the tall tales of the monks of St Titus, one though, on slam

the ´10 will beat 3NT 24.8% of the time maintains the author’s high standards both bidding, is the weakest

partnership would expect over a long interesting hands. Recommended for all here. Certainly the

period of time would be 3.37. In the bridge players who are looking for some- book is clearly pre-

example hand above, the best lead is clearly thing to make them smile. sented and well laid out (with an author of