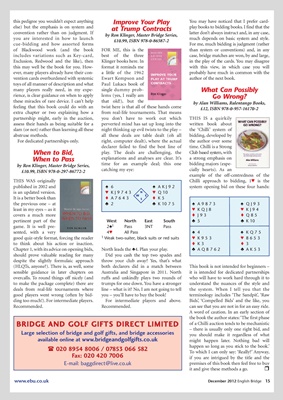 else) but the emphasis is on system and play books to bidding books. I find that the

convention rather than on judgment. If

at Trump Contracts latter don’t always instruct and, in any case,

you are interested in how to launch much depends on basic system and style.

cue-bidding and how assorted forms For me, much bidding is judgment (rather

of Blackwood work (and the book FOR ME, this is the than system or conventions) and, in any

includes variations such as Key-card, best of the three case, bridge matches are won, by and large,

Exclusion, Redwood and the like), then Klinger books here. In in the play of the cards. You may disagree

this may well be the book for you. How- format it reminds me with this view, in which case you will

ever, many players already have their con- a little of the 1962 probably have much in common with the

vention cards overburdened with systemic Ewart Kempson and author of the next book.

many players really need, in my expe- single dummy prob - What Can Possibly

rience, is clear guidance on when to apply lems (yes, I really am Go Wrong?

these miracles of rare device. I can’t help that old!), but the by Alan Williams, Ralentango Books,

extra chapter or two explaining how a from real-life tournaments. That means

partnership might, early in the auction, you don’t have to work out which THIS IS a quirkily

abstruse methods. all these deals are table dealt (oh all bidding, developed by

For dedicated partnerships only. right, computer dealt), where the actual the author over some

declarer failed to find the best line of time. Chilli is a Strong

When to Bid, play. The deals are challenging, the Club based system, with

When to Pass explanations and analyses are clear. It’s a strong emphasis on

by Ron Klinger, Master Bridge Series, time for an example deal; this one bidding majors (espe-

example of the off-centredness of the

THIS WAS originally Chilli approach to bidding, 1™ is the

to think about his action or inaction. t K3 t 3

despite the slightly formulaic approach throw your club away? Yes, that’s what

(HLQTs, anyone?). There is, as well, some both declarers did in a match between This book is not intended for beginners –

sensible guidance in later chapters on Australia and Singapore in 2011. North it is intended for dedicated partnerships

overcalls. To round things off nicely (and ruffs and unkindly plays two rounds of who will have to work hard through it to

to make the package complete) there are trumps for one down. You have a stronger understand the nuances of the style and

deals from real-life tournaments where line – what is it? No, I am not going to tell the system. When I tell you that the

good players went wrong (often by bid- you – you’ll have to buy the book! terminology includes ‘The Sandpit’, ‘Raw

A word of caution. In an early section of

the book the author states: ‘The first phase

– there is usually only one right bid, and

Large selection of bridge and golf gifts, and bridge accessories you should make it regardless of what

available online at www.bridgeandgolfgifts.co.uk might happen later. Nothing bad will

happen so long as you stick to the book.’

E-mail: baggdirect@live.co.uk premises of this book then feel free to buy

it and give these methods a go. r