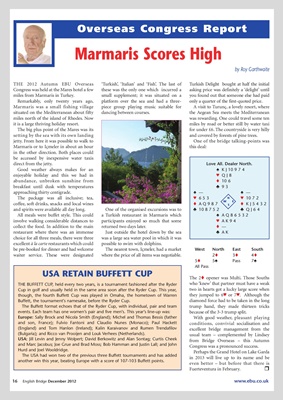 THE 2012 Autumn EBU Overseas ‘Turkish’, ‘Italian’ and ‘Fish’. The last of Turkish Delight bought at half the initial

miles from Marmaris in Turkey. small supplement; it was situated on a you found out that someone else had paid

Remarkably, only twenty years ago, platform over the sea and had a three- only a quarter of the first-quoted price.

Marmaris was a small fishing village piece group playing music suitable for A visit to Turunç, a lovely resort, where

miles north of the island of Rhodes. Now was rewarding. One could travel some ten

it is a large thriving holiday resort. miles by road or better still by water taxi

The big plus point of the Mares was its for under £6. The countryside is very hilly

setting by the sea with its own landing and covered by forests of pine trees.

jetty. From here it was possible to walk to One of the bridge talking-points was

Marmaris or to Içmeler in about an hour this deal:

in the other direction. Both places could

be accessed by inexpensive water taxis

direct from the jetty. Love All. Dealer North.

enjoyable holiday and this we had in ™ QJ8

breakfast until dusk with temperatures ® 93

All meals were buffet style. This could a Turkish restaurant in Marmaris which ´ AQ86532

collect the food. In addition to the main returned two days later. t —

choice for all three meals, there were three was a large sea water pool in which it was

excellent à la carte restaurants which could possible to swim with dolphins.

be pre-booked for dinner and had welcome The nearest town, Içmeler, had a market West North East South

waiter service. These were designated where the price of all items was negotiable. 2t 3t 4t

THE BUFFETT CUP, held every two years, is a tournament fashioned after the Ryder who ‘knew’ that partner must have a weak

Cup in golf and usually held in the same area soon after the Ryder Cup. This year, two in hearts got a lucky large score when

though, the fourth Buffett Cup was played in Omaha, the hometown of Warren they jumped to 6™ or 7™. Although the

Buffett, the tournament’s namesake, before the Ryder Cup. diamond force had to be taken in the long

The Buffett format echoes that of the Ryder Cup, with individual, pair and team trump hand, they made thirteen tricks

events. Each team has one women’s pair and five men’s. This year’s line-up was: because of the 3-3 trump split.

and Marc Jacobus; Joe Grue and Brad Moss; Bob Hamman and Justin Lall; and John Congress was a pronounced success.

another win this year, beating Europe with a score of 107-103 Buffett points.

even better – but before that there is