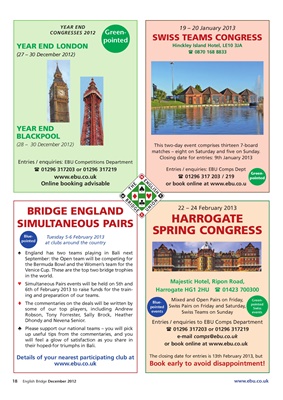 matches – eight on Saturday and five on Sunday.

at clubs around the country

´ England has two teams playing in Bali next

September: the Open team will be competing for

the Bermuda Bowl and the Women’s team for the

Venice Cup. These are the top two bridge trophies

™ Simultaneous Pairs events will be held on 5th and Majestic Hotel, Ripon Road,

ing and preparation of our teams.

some of our top players, including Andrew events Swiss Teams on Sunday events

up useful tips from the commentaries, and you e-mail comps@ebu.co.uk

will feel a glow of satisfaction as you share in

their hoped-for triumphs in Bali. or book online at www.ebu.co.uk

Details of your nearest participating club at The closing date for entries is 13th February 2013, but